So I brewed up a wedding beer for my buddy’s upcoming wedding this past Saturday. I made a 1200 ML starter Thursday night with yeast bay Vermont Ale and let it spin on stir plate for 24 hours then put flask in the fridge Friday night (the starter never developed any foam on top, which seemed odd but it had a good slug of yeast in the bottom after cold crashing so I assumed all was ok). Brewed the Off the Topper kit per my buddy’s request and brewday went off without a hitch, 75% efficiency. Chilled to 68 then pitched the yeast (which I set out several hours beforehand to warm up, decanted and pitched Saturday night) and left it to sit in my swamp cooler bucket. Checked it Sunday around noon before we left and saw signs of active fermentation so I put another ice bottle in, wrapped the carboy with soaked rags and left town.

Came back Tuesday and checked on it, temp was right around 70 on fermometer, maybe a tick higher but the krausen ring was barely above the beer and had dropped. Here is what it looks like this evening: 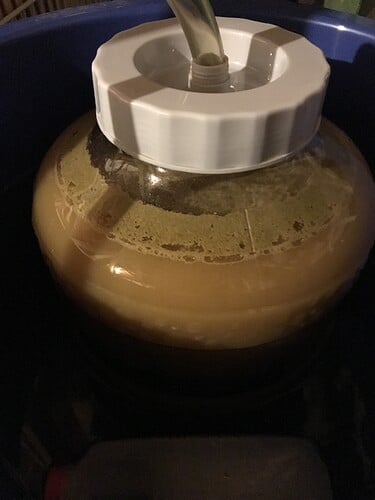 It’s still slowly bubbling away so it’s still clearly working, but I did this same beer less than a month ago (with Omega DIPA Ale yeast) and by now the beer was begging to drop clear and the krausen ring was up in the lid where it normally should be for 6 gallons in 6.5 gal carboy. I’ve brewed this beer annually for the past three years with the Yeast Bay Yeast and this is the first time I’ve experienced this. I know I’m overreacting and it will most likely be fine but this is just progressing much more slowly and less “normal” than any of my fermentations for the past 3 years and I’m getting a bit nervous. I will take a gravity reading Saturday to see where it’s at. Anything else I can do other than wait it out? Just overly worrying because it’s for a wedding and I want it to be great!

You should not have let the brew know it was for a wedding. The Bride, Groom, Brewer and Beer are all a little hesitant and unsure. In the end. all will be well.

It’s possible that the temps got a little higher than you expected when you left town and it fermented out. When you checked it Tues the temps were on their way down.

And remember it’s yeast and alive! Ever go to work and not really want to be there? Although you get things done you might not have completed tasks so quickly or lively…

Just did 10 of ESB, fermented with 2 different yeasts… one took a while to get going, the other took off like a rocket! They both finished up about the same time and the same gravity… So by looking, you really can’t tell, only your gravity reading, will tell you the rest of the story! Then a taste of the sample will give you a glimpse of whats to come. Sneezles61

Yeah, I realize that I’m overreacting and panicking a bit, most likely unnecessarily. Worse comes to worse, if it doesn’t turn out when I take the sample, I’ll just not drink my keg of Off The topper I just dumped the second dry hop in and give them that one instead and keep this one for myself. I’ll take a reading tomorrow and post back to see where it’s at.

I checked the gravity today and it’s at 1.018 after a week so things appear to be on track. I’ll give it another two weeks to clean up before kegging and dry hopping. Fingers crossed!

Ok, so I officially kegged this beer this evening and we finished out deliciously at 1.012 right where it should have. Guess I was worried over nothing after all.

Sadly, my bud reached out to the wedding hall and they won’t let him bring a keg of homebrew but bottles are fine. So now I am going to bottle off the batch I currently have ready in my kegerator and keep the “wedding beer” we brewed together for myself because first dry hops tonight, second dry hops Friday, force carb Sunday night, it won’t be ready to bottle Wednesday night.

Interestingly, I used two different yeasts on the two different batches. Same ingredients, same equipment, same fermentation vessel, same timeframe, same swamp cooler. My batch was fermented with Omega DIPA Ale, wedding beer was brewed with Vermont Ale Yeast. Omega finished at 1.014, Vermont Ale Yeast finished at 1.012. The Omega was watched like a hawk for temps, the Vermont Ale yeast may have gone too high quickly but finished out ok (see previous posts in this thread

) I am detecting a mild spicy bitey note on the aftertaste of the Omega yeast that I’ve never gotten from the Vermont Ale Yeast (this is my third year brewing this kit, it’s amazing). Almost like a Rye spicy note. I have a difficult time describing tastes TBH but I just found it slightly odd. Any idea what that flavor may be from?