My first brew... is this normal?

i wonder that [dark appearance] myself. but seeing as how this is my first brew, i haven’t a clue

Part of the darkness is because the beer is in the fermenter. It will be (at least some) lighter when it gets into the glass.

Assuming it’s the Chinook IPA extract kit, the instructions (link below) indicate a partial boil with all the LME added at the start of the boil. This approach will also darken the color some.

In brewing competitions that use BJCP guidelines, color is only 1-2 points (out of 50). And, in competition brewing, if the beer comes out “too dark” for a normal IPA, many people would enter it as a brown or black IPA

So far, your first batch is looking like it’s on track.

Any thoughts on what you might be brewing next?

I have my eyes on The Plinian Legacy Double IPA, but i feel i may have to work my way up to that… i am definitely an IPA man. always have been… the hoppier (bitter) the better! i think my sweet spot for alcohol is anywhere between 7 & 8%. once i understand how this all works, i may eventually mix my own ingredients… but that’s somewhere in the future.

Think why its dark could be due to mailard effect. Put a shirt over the carboy. The yeast likes to live in the dark to do its thing

So i noticed that the yeast started working in less than 24 hours… bubbles moving through the fermentation lock at around one (bubble) every two seconds… now on day 3, the speed has noticeably slowed down. “flars” says his fermentation (for chinook IPA) is always done on day 10… i wonder if mine will be the same… though i followed instructions, i fear that i may have somehow not adequately sanitized the equipment.

…having doubts about racking for a secondary fermentation. may just drop the extra hops in the large carboy when the yeast is finished…

I’ve begun maintaining the highest temperature reached during active fermentation to make sure maximum attenuation is achieved in the primary. I’ve recently had a problem with highly flocculant English strains not fully attenuating in the primary. Haven’t had this problem with American strains in the past, but will make it a standard practice with all yeasts. I maintain the heating only until final gravity is reached. I’ll let the beer cool off to the ambient temperature until bottling day.

The room I ferment in has an ambient temperature of 66°F this time of year. Heating the water bath of the swamp cooler has pretty much become necessary for all the beers brewed this summer. If your ambient temperature is 70° - 75°F you won’t need to worry about heating to maintain the temperature.

I’ve never had a problem dry hopping in the primary. Should say the largest dry hop I have used is only one ounce of hop pellets. I do use a catch bag on the end of the siphon tube in case some hop particles make it through. Picture of gadget here in post #11.

Found this hose clamp very handy to hold the dry hop debris catcher on the end of the siphon tube. Much easier than a rubber band. [image] Few days ago I bottled a Dead Ringer. This is what my safety bag caught in the bottling bucket. [image]

are you saying that the quick fermentation that i am experiencing might be the result of high temperatures and that they might produce fusel alcohol as a byproduct? our house is kept at 79 degrees during the summer & 67 degrees in the winter. so i reckon that’s what our ambient temperature is… lots to learn!!! funny you should mention a swamp cleaner… i’m going to Burning Man this year and am thinking of making a DIY swamp cooler for the desert.

p.s.- i’ve also figured that the 5 gallon beer making equipment makes approximately 52-53 bottles of 12 oz. beer. the process takes 6 weeks, but i drink about 2 beers a day on average… so that means i only make a 3.5 week supply! if i want a constant supply of my own beer, i’ll have to up the quantity.

are you saying that the quick fermentation that i am experiencing might be the result of high temperatures and that they might produce fusel alcohol as a byproduct? our house is kept at 79 degrees during the summer & 67 degrees in the winter. so i reckon that’s what our ambient temperature is… lots to learn!!! funny you should mention a swamp cleaner… i’m going to Burning Man this year and am thinking of making a DIY swamp cooler for the desert.

p.s.- i’ve also figured that the 5 gallon beer making equipment makes approximately 52-53 bottles of 12 oz. beer. the process takes 6 weeks, but i drink about 2 beers a day on average… so that means i only make a 3.5 week supply! if i want a constant supply of my own beer, i’ll have to up the quantity.

You do need temperature control both summer and winter for almost all ale yeasts. Your ambient temperatures are too high. Fermentation is exothermic. The heat produced during the first few days of active fermentation can raise the temperature of the beer 3° to 8°F depending upon the OG.

I get 48 to 49 bottles for a five gallon recipe. I prefer 48 since two cases stack nicer.

I will very often have more than two beers a day, but some of favorite beers are less than 4% ABV.

I will start at mid to upper 60’s until fermentation is just getting rolling along, then turn the temp down to 62-63. I’ll leave it there until it slows way down. I will open the lid on my freeze-mentor to allow it to climb to room temp for a few days. take a sample/test, confirm its done then right down to 32. This has been treating me good, and not much gelatin treating any more… Sneezles61

guess i need to get some climate control in place… hope i haven’t ruined my first batch… thanks for the info… guess i need to read a book on the subject!
-b

RDWHAHB. (Relax, Don’t Worry, Have A Home Brew) don’t put too much worrying into this… you’ll get ulcers… Sneezles61

Like what flars said. The kveik is aweome yeast can hold up in high temp me here on a topical island. For the first week i use a swamp cooler. Steady temp control i do have. Later on temp seems to be fine for my ales. Thanks to kveik yeast

I admit, I don’t usually put too much thought into my fermentation temperatures… but my brews stay in the basement where the temperature is pretty steady and in the mid 60s (plus it’s nice and dark down there).

As mentioned earlier, that trub (gunk) at the bottom of the fermenter is normal, and should be left behind when bottling.

I don’t think you did anything wrong with sanitizing. Many of my beers ferment “aggressively” for 2-3 days or so, then they slow down, and then the bubbling stops almost all together. This doesn’t necessarily mean that the fermentation is done, it just means that the yeast is no longer producing enough gas to create high pressure, hence why the bubbles stop. You should use a hydrometer, measure after 10 days or so. Then, measure after the 11th, the 12th, and so on. Once the gravity has settled for a few days in a row, that is when the fermentation is done. There is no real harm, however, in just trying to play it safe. When I first started, I never measured gravity, so I just waited a few extra days longer than instructed in the recipe, that way I was more likely to catch the batch after fermentation was complete.

thank you for the input… i have just ordered a hydrometer kit from amazon as well as the book, “How to Brew: Everything You Need To Know To Brew Beer Right The First Time” by John J. Palmer. I also think my next brew will be the same recipe as this one (chinook IPA) so that i can compare the two batches… my house has no basement, so i can’t stash it down there… right now i am keeping the fermenter in a dark closet, but i think i might buy a used wine cooler (or mini frig) off craigslist ($60-$75) to control the temperature better.

interestingly enough, i live in Jacksonville, FL where i just found out that one of our local breweries, Bold City Brewery makes Chinook IPA… so that will create another opportunity for comparison.

this forum has been a tremendous place to get advice without the snark… thanks!

this forum has been a tremendous place to get advice without the snark… thanks!

Thanks for that! We try to be helpful. I know activity has sort of subsided on this forum lately, but it’s exactly that helpful, snark free attitude that makes me happy to be a member. As you read (excellent choice for a first book, by the way), feel free to ask more questions.

You should take some specific gravity readings to confirm final gravity has been reached before you do anything else. Racking to a secondary vessel before FG can stall the fermentation and result in off flavors. Take a gravity reading, and taste today. Take a second one at least three days from now.

I don’t think the fermentation will be finished yet. You may taste some green apple flavor in your SG sample. This flavor can stay with the beer when the yeast is not given time to clean up.

I dry hop in the primary when the fermentation is complete. Usually around day 14. Bottle at day 21 when the beer is dry hopped.

… when do i add the dry hops? the instructions are a little unclear as to whether i should do it immediately after the transfer to the secondary fermentor, or wait a week? …anybody?

If your instructions instructions are similar to these http://www.northernbrewer.com/documentation/beerkits/ChinookIPA.pdf) 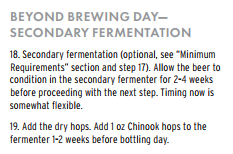 then let’s assume that we will 1) condition in secondary for three weeks, 2) dry hop for one week, and 3) decide on August 1st that we can transfer to secondary. Secondary would end on the 21st. A 7 day dry hop would start on the 15th.

I will do this (transfer to a secondary fermentor) occasionally, so I’m happy that I learned early on how to do it well.