Loss of volume while brewing

Bought our first kit from NB today. 1 gallon batch of Zombie dirt to be exact. Followed the instructions with starting with 1.25 gallons water. After the wort was done and transferred to the main fermentor we got maybe a 1/2 gallon out of it. Only thing I can come up with is when we boiled the malt and hops we never put a lid on it and had serious evaporation.
Any insights?
Thank you

Depending on your pot you can easily boil off that much. One gallon batches you really have to throttle your boil.

Just afraid that now only having a half gallon in the fermentor that it is pretty much junk sense it is so concentrated now.

It won’t be junk, but it will be stronger you can always add water when you bottle.

Thank you appreciate the answers

Now the wife won’t be too mad.

After you do your boiloff, top it off in the fermenter with chilled water to get the volume you want. If you followed a recipe and it says you’re supposed to get an initial volume of 1 G, but you boiled off down to 1/2 gallon, then you have basically doubled the OG, and the potential ABV. It may not be undrinkable, but it won’t taste the way it’s supposed to. Oh well, there’s a learning curve. :mug:

Also I tend to start with 1 1/2 gallons for my 1 gallon brews and tend to end just under 1 gallon and only need to top off very little.

I think it would be worthwhile to top this one off to one gallon with brewing water chilled to 64°F before fermentation begins. This would be the best chance for the yeast to ferment out the double strength wort.

IBU’'s may be a little low with the higher SG wort, but I think there is a better chance of being a beer to drink than at double SG.

Edit: Aerate the brewing water before adding. If you used dry yeast this may not be necessary, but will not be detrimental to the fermentation.

You should do a test boil for an hour of just water to see how much you are boiling off. For one gallon kits on my set up, I boil 2 gallons of water, but I’m using a turkey fryer and have a loss of about .75 gallons. After straining off the wort, I usually fill up my fermenter and get a hydrometer and still leave behind the trub.

I recommend you boil to gravity, not volume or time. That way you at least get the beer you started out to make. After your boil, check the gravity. If it’s what it’s supposed to be, you’re done regardless of volume. but if your OG is high and your volume is short, you can add enough eater to hit your OG target and increase your volume.

I always start with 1.5 gallons for a gallon brew. You probably lost so much do to using such a larger a pot. More open surface area you probably boiled it too hot causing it to evaporate quicker. Using the right sized pot helps reduce water loss. Try a two gallon pot next time. Also like others have said top off with water when you put it into the fermenter.

Thanks everyone for the input. I did just top it off this morning but then when I got to work I realized that I only used a quarter pack of the yeast instead of a half a packet since I only had a half a gallon when I moved to the first fermentor. Might just have to swing by NB tomorrow pick up another kit and start over.
On a lighter note I am getting good fermentation out of my 6 1/2 gallon cider batch I started. Regular airlock couldn’t contain the beast.

Do you still have the wort? Do you have a couple of days before you need the fermenter?

My thought is that the SG for your wort is close to target, but the yeast is stunned/dead due to being pitched in the initial high SG wort.

If you have yeast left from kit, take a SG measurement, pitch another 1/4 pkt of yeast, wait a couple of days, and see what happens.

If no yeast left from original kit, take a SG measurement, stir the wort gently, wait a couple of days, and see what happens.

Edit: In retrospect, I should have asked for photo at this point to verify that fermentation was (or wasn’t occurring. I had anticipated, incorrectly, that most/all of the yeast was dead. mea cupa.

I do still have the wort, I thought we only had a quarter of the packet but my wife said she had did add a half packet. Will get the SG tonight when I get home.

I wouldn’t worry about SG now. Your SG should be the recipe SG with the full amount of wort in the fermentor.

Now is the time to be nice to the yeast and keep the beer at a stable fermentation temperature. Most ale yeasts ferment best in the low to mid 60°F range. The yeast will produce heat as the fermentation begins. The temperature of the beer will always be higher than the ambient temperature. S-04 is more neutral at 60°F to 63°F.

Good luck with your first brew.
Welcome to the NB forum.

With the 1/2 packet initial pitch, if you see any initial signs of fermentation, skip the SG measurement and let the yeast do their thing. If in doubt, post a picture.

Edit: posted this at same time as flars. 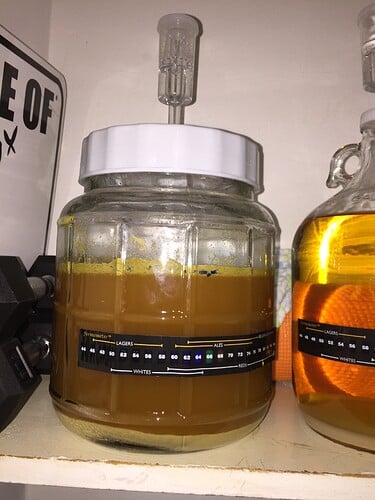 It’s in a closet