I used the wrong yeast

So… What difference should I expect with the La Petite Orange?

And, I’m all for experimenting… If I decided to pitch that belgian yeast into the stout, would it produce something interesting, or should I just pick up the more appropriate yeast for that kit?

The La Petite Orange may finish with a higher SG and be more on the sweet side than dry. I would get another pack of S-04 for the stout. A Belgian yeast for the MIlk Stout may produce some unusual fruit flavors.

I’m about 1 week into the primary. Would it be worth it to go ahead and pitch the belgian yeast in the La Petite Orange and let that yeast do a little work?

Maybe I should check the gravity and see what’s left for the belgians to munch on and then just pitch?

Looks like there isn’t much left for the yeast to snack on. Here’s my gravity after 7 days in primary:

Maybe I can boil up some corn sugar and pitch that in before the yeast. A little bump in the gravity is never a bad thing in my book anyway. 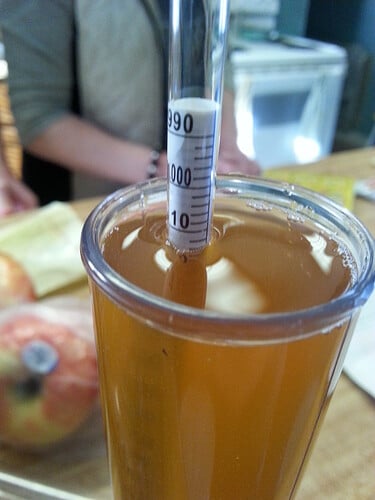 How does the SG sample taste?

Samplet wasn’t bad. I’d drink it. I don’t remember what my last batch of this brew tasted like.

One other crazy idea I had and I’m sure some idiot has done it before… What if I treat this nearly finished beer like a wort and add maybe a half gallon of boiled water with a pound or two of sugar. Then re-rack and pitch the belgian yeast. Don’t know why I’m running all this through my head. Seems like I’m just hell bent on using that Wyeast 1214 Belgian Abbey.

Usually a fix causes more problems. If it tastes good now, it will most likely be better after carbonation. Consider increasing the carbonation very slightly over what your last Petite Orange. This will add some spritz taking away some of the heavier body.

NB as an offer for free shipping on an order for $49+ going for a few more hours.

Had an even more brilliant (and commonly used) idea. I’ll use the yeast cake from this batch for the Chocolate milk stout batch. Won’t have to run out and buy yeast nor mail order any.

This beer is light enough in flavor. Shouldn’t affect the stout much, I wouldn’t think.

You’ll have enough yeast for a few stouts harvesting this yeast. The yeast won’t impart any noticeable flavor from the petite orange…

That’s a good idea. I’m sure your PO will be fine just something different than expected. By the way I pitched a Belgian yeast to a porter once and kept the temperature down and it turned out fine, not traditional but definetly tasty.

Let that Belgian yeast go at the temps it should don’t worry about the esters all you done is make a Belgian sweet stout. I make them all the time and coming from a half Irish half German family every one loves them. You can look them up not recognized style by guide lines but is a style of beer.

It would be a total waste to pitch the Belgian yeast now. Pitch your stout on the yeast cake and order anothe PO. Problem solved. You get a free 5gal from the us-04.

Went ahead and pitched the stout on the yeast cake. Took off within a couple hours and was bubbling like crazy.