First off, thank you for any help or comments that you provide! So my problem is that every time I pour a glass of beer from my brand new kegerator all I get is foam. I brewed the Grapefruit pulpin and used sugar for the carbonation. After kegging the beer it was a few days before I realized I had left the blow off slightly open. I closed the blow off and hoped for the best seeing as I probably lost a good amount of co2. When it came time to finally try the beer, I poured a glass and there was no head and it was flat. So I decided to force carb the beer to get it to where I wanted it. I turned the co2 up to 25 psi and rolled the keg for a few minutes a couple of times over the course of 3 hours. I let the beer sit overnight and into the next evening. I released some excess co2 and set the serving pressure to 10 psi. The beer came out with a little head and not quite the amount of carbonation I wanted so I decided to force carb a little more. I repeated the same process as above except I didn’t roll it as many times. The next day I released the excess co2 as before, set the pressure to 10 psi and poured a big ol glass of foam. I thought it may be from shaking the keg so I let the keg sit until the next day. When I tried it again, another glass of foam. I then turned off the co2 bled the keg and waited another day. Again set the pressure to 10 psi and still nothing but foam. I am at a loss as to what to do next seeing as I wasn’t pouring straight foam before the second force carb. Please help!!

I will take a stab, have you left it in the cold? CO2 is absorbed and held best while cold. So, I am thinking that it will take some time to release to CO2 to get down to what you are looking for. I don’t buy the hose length argument, I have a very short picnic tap, and about a 5’, and I get the same pour. Sneezles61

Thanks for the reply! I stored the keg initially at room temp for 2 weeks while it was carbonating with the sugar. It has been stored cold around 39 since then. I’m hoping that it’s just a time issue and not something more complicated.

If you primed it with sugar and then force carbed at 25 psi…could be overcarbed?

Sounds over carbonated. You added priming sugar which would have resulted in CO2 production. You didn’t say how long after the 2 weeks of natural carbonating you stored it cold but once you did that the beer started to absorb the CO2 in the headspace.

After that, you then mechanically forced carbed it the way you did (force carbonating is any use of CO2, not just shaking), which resulted in more CO2 being absorbed by the beer.

Unhook the beer from the CO2. Purge the keg a couple to a few times per day for the next 2 days and retry the beer. As you purge the keg the beer will release CO2 to bring the headspace into equilibrium. If it’s still too carbonated keep purging.

A couple other thoughts…
Serving with too short of a line will result in beer turbulence resulting in a release of CO2. Also, as the beer warms in the line it releases CO2 resulting in foam.

Do you only hook up gas to cask conditioned kegs when serving?

I stored it cold for around 1 week before I tapped it. The reason I tried to force carb after using priming sugar is that when I poured my first glass it was severely under carbed due to me accidently leaving the keg blow off slightly open for a few days. I figured the 2 weeks at room temp then the one week cold would be plenty of time for the carbonation to build. I’m new at kegging as this is only my second kegged beer and the first one I made had no issues at all. I have it disconnected and I will keep purging it to see if it gets any better and update in a few days. The line length is 5 ft which is what the kegerator came with. I saw the calculations for how to figure correct line length and everything but I think I’ll probably try purging it for a few days before I start changing those lines out lol.

When I cask condition a keg, it only is hooked up for serving and as cool as you can, without refrigeration… I like to lay my keg on its side and roll it often to get/keep the yeast in suspension… stand upright to serve… Sneezles61

Got to make a choice. Force carbonation. Or priming sugar. Both methods dont work. To much carbonation. Going on

When I encounter an overcarbed keg, the simplest solution I have found is to turn off the gas to the keg and bleed the valve several times throughout the day. I also tend to pour a pint of foam or two with the gas off and let that settle down because I tend to be impatient.

I went with priming sugar at first but I didn’t realize the blow off valve was slightly twisted up and open so a majority of the CO2 produced by the sugar escaped. This left the beer flat and under carbonated which in turn led me to force carb. In any normal circumstance I would use priming sugar.

Yea I think that is what I plan on doing. I was thinking it may be over carbed but I was also worried something else was going on. I am also guilty of being impatient lol.

Well, as long as it doesn’t have any off flavors/smell, just keep pulling pints, burp the keg and it will settle down. Don’t dump the pints, they’ll turn to brew… Sneezles61

I sure hope so! I’ve been dying to actually sit down and have a pint of this beer. I let the few glasses I poured settle down but after I did there was little to no bubbles in the beer itself and just a huge foam head. It went from a full glass of foam to a large head that didn’t quite dissipate the rest of the way. That is why I was confused on whether or not it was actually over carbed. I haven’t noticed any off flavors or smells so I’m not thinking that it is contaminated at this point but I’m also not ruling anything out yet.

I’m not sure how you have a blow off connected to your keg but any way the CO2 can escape would mean you just fermented some sugar in the beer. Might raise the ABV a tiny bit but not carbonate. So that puts you back at square one for carbonation.

At room temp you could have tossed in more sugar and waited again. It’s a good idea to give the keg a shot of CO2 to make sure the lid is sealed. To force the best bet is still “set it and forget it”. Set it to 12 lbs or so, stick it in the fridge and forget it for two weeks.

I have tried most methods to quick carb and the results vary. Usually did 30lbs and bounced the keg or rolled it. I even have heard of a guy that hooked it up in the trunk of his car and took it for a ride.

Like @radagast I also will turn off the gas and pull the pressure valve a few times. Then if necessary pour a pitcher and put it in the fridge to settle. 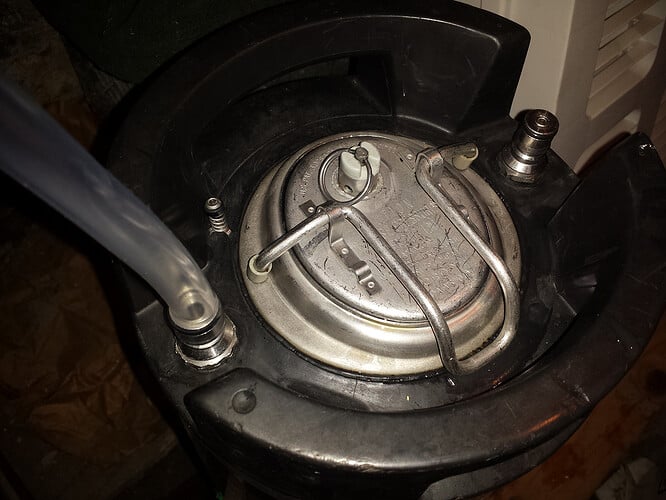 So this isn’t my keg but it looks similar for the most part. The blow off valve I’m talking about is the valve with the white tip in the picture that has the ring on it. I didn’t realize it at the time but it was slightly twisted and barely open which led to the CO2 escaping. After I closed it and let it continue, I pulled the tab very quickly just to make sure some CO2 was building inside and it was, so at the time I didn’t want to add any more sugar for fear of overcabonation. I think if I force carb in the future I will def go low and slow because I feel the rocking method got me into this mess. But anyways I am going to keep bleeding it for a few days and hopefully that will solve the problem.

Typically when this happens, most of the CO2 is knocked out of solution on the way out because it’s overcarbed and flying out of the tap at the speed of light

. This is why you get ridiculous amounts of foam and very little residual carbonation in the beer. Once you bleed it down for a few days, that should slow down the flow and the CO2 will stay in absorption.

That is good to hear! I was worried something else was going on. I still have a lot to learn about kegging and this is definitely serving as a learning experience. Thanks for the info!

That is the pressure relief valve. Very handy to get the lid back off when the keg is empty. Whoever did this keg removed the “poppit” valve from the gas out connect to make a blow off. Ingenious but it is difficult to actually ferment five gallons in a five gallon vessel without some loss. I assume he replaces the poppit to push the beer into another keg or just replaces it and carbs in it.

Priming a keg still works well. I have one going right now. No refrigeration needed and doesn’t tie up your tank and regulator.

Yea I was referring to it as the blow off because I know that it relives the pressure inside the keg thus blowing it off I guess. But I can definitely see where that would be confusing. Sorry! As for the picture, I definitely agree with the loss problem. I ferment in a 6.5 gallon bucket initially and then transfer to a secondary 5 gallon carboy. There has been plenty of times where the fermentation gets so intense that it blows a mess through my blow off tubing. I can’t imagine fermenting 5 gallons of beer in a 5 gallon vessel, at least during primary fermentation.

I think priming is definitely the way I will continue to go, force carb just seems to use so much CO2 and the rocking method seems very touchy. I just wish I had realized my mistake before it was too late lol.