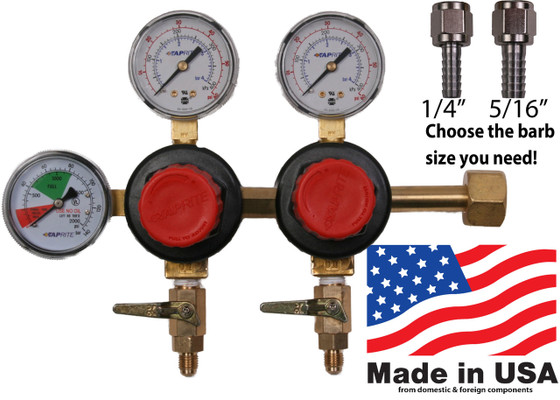 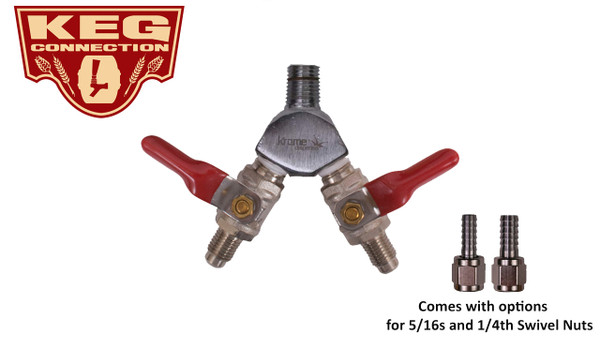 So I have 2 kegs each off a low pressure gauge.

In the last couple weeks one of the low pressure gauges has crept up overnight from my setting of 9psi to 12psi. I reset the pressure and bleed off the keg each day and then it creeps up in the next 24 hours.

If the keg has a higher pressure than the gauge setting the check valve should keep beer as well as gas from going back up the line correct? So I guess this means the gauge is probably going bad huh?

That would be my interpretation of what you’re experiencing, although I am a relative kegging noob. I use a 4x manifold …I like those WYE Dual check valves by the way, have to get 1 or more of those.

Ugh… finally sorted my leaks, and am now seeing a similar creep. Didn’t realize regulators could be bad… not that I’m going back to bottles, but sheesh…

My regulator creeped the first couple kegs. Not sure if it was inconsistent cooling temperature in the fridge or if there was another issue with the regulator.

Could be the temp inside the fridge not consitent. Had same thing in the beginning. Now i got it at the same temp and seems to be fine. Turned out my thermostat turned out to be bad. I did replace this and now iam fine

Still under warranty? Keg connection has a double length warranty on your link of two years.

I had a really old Tap that that did that. Then it started to leak CO2. Couldn’t find a rebuild kit for it so I just bought a new one.

Just thought I’d close this one out.

Turns out my pilsner which was in the fridge alone for a bit is overcarbed enough to send pressure back up the line and push the gauge to 12psi when I set it lower. It’s on one side of the ‘wye’ linked above. When I purge the pils keg the pressure drops to whatever I have it set to. If I purge the other keg of the wye no effect on the gauge. After it sits for a few minutes the gauge creeps back up to 12. The pour is pretty fast on the pils with a bit too much head. So I’'ve shut off the gas to it for now and am purging a bit of the CO2 off…by drinking a few extra pints of it tonight…haha

I thought the check valve should keep that pressure from coming back up the line and pushing the gauge up? Guess I need to replace that check valve.

You’d think, with a check valve, that it would be a bit longer. Maybe they are allowing the manual valve to be considered a check valve? I would be taking it apart to see what makes it tick, er stick… I’m curious about these things… Sneezles61

You’d think, with a check valve, that it would be a bit longer. Maybe they are allowing the manual valve to be considered a check valve? I would be taking it apart to see what makes it tick, er stick… I’m curious about these things… Sneezles61

I’ve had them apart. It’s not just a manual shut off. The larger body piece is a ball valve. The smaller component that screws into the ball valve body is the check valve. It’s actually multiple pieces machine pressed together. I’m guessing a tiny stainless ball that reacts to the pressure shutting off flow if the pressure is greater on the keg side. I can blow through it from one direction but not the other.

I did see a forum thread somewhere that mentioned them getting stuck closed or open. Definitely could happen if you got beer up in it.

I’ll have to take that one off tomorrow and check it out.

I think I solved my regulator issue today, the dumb, easy way. To recap, I would set it at 9 psi, pull a few pints, and the next morning, it would be at 15.

I saw a tip elsewhere that there might be a bit of grit or other foreign material might be stuck in the diaphragm, and to blast it out. I disconnected the regulator from the gas lines, with the tank shut off, opened the regulator all the way, and blasted a few shots through. Hooked it all back up, and reconnected everything. 7 hours later, and it’s holding steady.

I’ll have to give that a try. I just put another new beer on my other wye and it’s doing the same kind of creep after I left it at 30psi for a day.

I’ve got regulator creep as well, but mine has different symptoms. Works fine and holds steady until the CO2 tank begins to get low, then it slowly creeps up from my setting of 10 psi to about 15 if I don’t catch it. Usually figure it out when the pour gets too foamy.