I’m still very new to brewing. I have my first batch of Irish red sitting in my primary going on day 16 now and plan to take a reading this Friday before bottling it up.

When I purchased all of my original equipment I did it so that I could eventually start all grain brewing. With that is a 10 gallon megapot with valve and and edle propane burner so I will have no problem achieving a full boil. I do have a few questions however. I have been reading about calculating the amount of water to start a full extract boil and was wondering if I accidentally end up with a half gallon or gallon extra if it will affect the OG. The next kit I have and want to try it on is a Belgian wheat with DME.

Second question is when do I add the wort chiller to the boil? I’m assuming for sanitary reasons I want to add it about 50 minutes into the boil and like the boil kill any potential nasties on it?

Final question, if I am using the valve on my pot, should I spray it with SAN star solution thoroughly before I open the valve and let the wort flow into my carboy? The megapot comes with an angled attachment inside of the pot thatbisnsuppose to point towards the. Ottom but I was planning on reversing the direction to leave the settlement in the pot.

You can fill the kettle with 5 gallons of water and boil for 60 minutes to calculate your boil off rate. Measure how much water is left after the boil. This will give you an accurate measure for the rate of the boil and weather conditions on that day. Weather does affect boil off a little. Then you can calculate how much liquid volume the LME will add if it is used.

I would be to lazy to do that and it would waste water unless it was recovered for another use. I would just start a 5 gallon brew with 5 gallons of water in the kettle. Record the volume of LME used and record how much top off water was needed to bring the fermentor up to the 5 gallon mark.

The kettle valve should be sanitized by the heat of the boil. I would clean it thoroughly after every brew session so gunk doesn’t get burned on blocking the flow of the wort.

Turning the dip tube upward will leave most of the debris in the kettle when it is given some time to settle after chilling.

Having the chiller in the boil for 10 to 15 minutes will sanitize it. Watch the connection tubes so they don’t melt from the heat. Point the chiller in a safe direction. Liquid that might remain in the chiller can shoot out as it comes to a boil.

Edit: OG will be affected by volume. Increased with less volume and decreased with more volume.

If you finish with more volume than your target, your OG will be lower than projected, but this is not a huge issue when you are starting out. The nice thing about extract is your OG should be pretty much exactly what is specified in the recipe if your final volume is close. You will learn your boiloff rate as you practice but a little topoff water into the fermentor is not the end of the world. Also, if you are using LME, don’t forget to account for it’s volume when added to your pot. When I started I targeted water volume only and was surprised by how much volume was added by LME. I see Flars answered the rest of the questions so I’ll stop there for now.

Thanks for the info. When I top off a fermentor, what type of water should I be using? Should I treat a gallon or so with campden and then boil it and let it cool while I am brewing?

I top off with cold water straight from the tap. I have my own well though. No chlorine or chloramines. Treat municipal water with Campden and chill the day before brewing. On brew day you could put it in the freezer to super chill it.

Thanks I’ll try that. I didn’t know about chloramine in my first batch that is currently in the carboy so I didn’t treat it but the chloramine ppm here in Portland is about 1.5 if I read the chart correctly. I’m not too concerned. I think that might be something northern brewer should mention in their beginner video but oh well. Thanks for the advice.

You’ve given me an idea. The forum/site needs some information in a prominent place for “new to brewing” persons to see, and then ask questions. I’m not sure where to put it though so it will be easily found. A basic question that will help getting this done. Did you look through the “Getting Started” category when you decided brewing your own beer might be an interesting undertaking?

I didn’t even know about this forum until after I brewed my first batch.

For your immersion chiller…If it has the plastic tubes connected directly to the copper/stainless coils with worm clamps…Be aware that once you put it into the boil you can like flars said burn the tubing, but also the tubing connections become loose and might need tightened before placing into brew kettle to chill. I usually star san soak my chiller before putting into BK, but I decided I would try boiling it to sanitize it…I had boiling water shooting out the ends and when I hooked up the hose and turned the water on, water became spewing out the worm clamps directly into my wort before I tightened them down again. Ever since that happened, I went back to just soaking my chiller in Star San and I never have issues with the clamps.

I will scrub my wort chiller prior to dunking it in the kettle, and I will put it in for the last 15 minutes… Yes, watch your tubing… Sneezles61

Thanks guys! I just measured my SG for the first time since being in the fermenter for 17 days and the Irish red is at 1.010 so it looks like I’ll be bottling my first batch this weekend and brewing up my first Belgian wheat! The red tasted pretty good. I would compare it to fat tire and no band aid taste whatsoever! Phew! 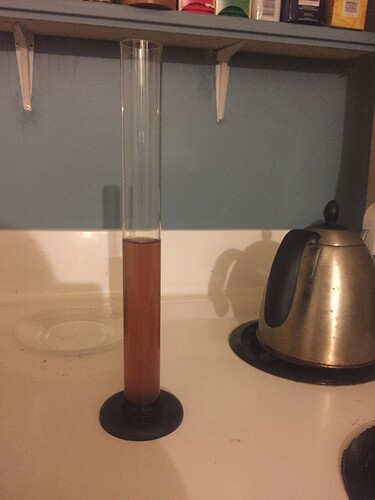 Here is the final color. Does it seem too hazy?

I never sanitize my immersion chiller with starsan or preboil it. I let the wort do the sanitizing for me. I place it in the boil about ten minutes before its done. Of course I make sure the chiller is clean and no grungies on it. Afterwards it is just rinsed well with hot water to clean, hung to dry and then stored away til next time.

I’ve just been rinsing most of my equipment with hot water after use so they don’t get build up on them and have no left over soap residue. Then a few minutes in the star San before use

Looks good. I hope you had a larger amount in there when checking your SG. The hydrometer has to float.

Yeh that was after I drank it

Thats the best part of taking a sample… Tasting! Sneezles61

I generally shoot to the low side much rather add a little water than a longer boil. I think the extended boil has more affect than adding a 1/2 gallon or so of water. By the way I add it to the brew pot not the fermenter. First it helps cool the wort and secondly it sanitizes the water since I take it from the faucet

How much water will you generally start with? 4 or 5 gallons?

I generally start with a gallon more than I’m targeting for my end volume. For instance I design the recipe to end at 5.5 gallon so I’ll mash trying to end up with 6.6 gallons preboil