What is the best way to use fastpitch as a starter? Liquid vs. Dry yeast? stir plate vs. Hand swirling? how long to let it sit before pitching?

I used dry yeast in my fastpitch starter, as I didn’t know any better. I only let it sit for 22 hours, and I hand swirled the starter. I wish the instructions were cleared on this. As a new brewer I am still learning all the specifics about brewing, grains, liquid malts, and yeast. When the dead ringer kit calls for the use of a starter, I wish it were more specific about they type of yeast to use and the best way to make the starter. I’m hoping it works out, saw some krausen this morning and it is bubbling through the blowout tube after pitching last night, but I’m worried it will be underpitched now. Should I add another dry pack or wait and see?

I would wait. Adding more yeast. If you order a beer kit. At nb. Go to the bottom. You do get the recipy. I do like to make a starter. For all my beers. Got liqued yeast. I do like it beter than the dry yeast. But thats my opinion. You can choose the yeast as well. When you place the order. A starter fun to make. And the stirplate. With a 1 liter flask not so expensive to buy. Just do a calculation. On how much lme to use to create a starter. Let it run for 36 hours or so. Cold crash. And on brewing day take it out of the fridge. You can separate the yeast before you pitch. Toss out the light color. Of your yeast starter

I was never more frustrated with homebrewing than when I first started asking about starters. The frustrating thing is that there are so many different ways of doing starters, so you will get lots of opinions, not all of them consistent, and many of them contradicting each other.

Some people will take 5-7 days to let a starter go, some will get one going, then pitch it the next day when the starter is active. Both camps have some level of success with their methods.

Here’s my usual workflow with the yeast/starter question. I also use FastPitch because I’m lazy and it works well for me.

IF- OG is planned to be under 1.055, just make sure the yeast is relatively fresh, don’t bother with starter.

IF- OG is planned to be 1.060-1.070, either pitch multiple packs, or build starter:
1 can fast pitch, mixed with 1 can water
1 packet of yeast
Hand swirl, and pitch next day when its active OR
If there’s time, let it ferment out, chill in fridge, decant, and pitch the thick slurry (takes 4-5 days to do this)

IF- OG is higher, do stepped up starters- make a starter for four or five days, chill, decant, then build up again. My last beers (1.100 and 1.080) I stepped up twice, then the night before brew day, threw in more starter wort and pitched while the starter was actively going. I got quick starts and pretty healthy fermentations.

That’s just my method, and if you throw it into a calculator, I probably underpitch by a fair amount. But it works for me. Lots of people probably do it differently. The way I look at it, any liquid yeast thrown into some sort of starter, either for a day or a week, is probably improving your pitch rate some. You’ll have to try a few different methods and find what works for you.

My recipee kit had an expected OG of 1.064. My OG was 1.068. If I used one dry yeast pack in my fastpitch instead a liquid, should I be worried? Should I have doubled up and used 2 liquid yeast packs? Just trying to figure out if I will have a problem, and if so how I can fix it without risking the brew itself. I really wish the instructions for the fastpitch indicated that you should use a liquid yeast instaed of a dry pack.

That’s kind of right on the borderline in my opinion… a lot of people say that dry yeast tends to go a little farther, and one fresh pack is good up to about 1.060. Since you have activity already, I’m tempted to say you might be okay. If you happen to be close to a homebrew shop and can pick up another pack today to pitch, it couldn’t hurt things. Also be sure you’re at a decent fermentation temperature for your yeast strain. Fermenting too warm is another potential cause for off flavors.

A starter will work with liquid or dry yeast. Never used Fast Pitch but I assume it is just canned sterile wort. Just like you would make by boiling some DME then cooling.

Starters don’t always show a big Kreuzen like a full batch so it may have done it’s thing already.

If you made a starter with the FP and a pack of dry yeast I would pitch it and keep an eye on it. It’s never a bad idea to have a spare packet of dry yeast on hand just in case.

Thanks uberculture. This is only my third brew. I did some things wrong on the first two, but I am really enjoying learning and fixing my mistakes. I really thought that I nailed this one, until I read about the fastpitch only being ideal for liquid yeasts. Like I said wish I knew that before using it! I don’t have a store close to me, but I do have more yeast packets coming in the mall on Wednesday. I will keep an eye on it and see what happens.

I was going to offer some opinions early this morning but my help showed to take down some trees.

Making a starter is best with all liquid yeasts. Often the liquid packs are 2 or 3 months old or older and have lost some viability. I like to use this calculator when planning a starter with fresh yeast or harvested yeast. The calculator also has a guide for inoculation rate to achieve what may be the best growth rate for the volume of starter wort and estimated viability of the yeast pitched.

Use Homebrew Dad's Online Yeast Calculator to determine how many yeast cells you need to pitch into your wort.

You can make a starter with a pack of dry yeast but it must be rehydrated before adding it to the starter wort. You can kill up to half the cells of a pack of dry yeast by directly adding it to a wort. Fewer cells will die in a starter wort of 1.040 than a wort of 1.080 but cells will die because of damage to the cell walls from the osmotic pressure created.

When dry yeast is properly rehydrated you have healthy liquid yeast. The yeast can then be used with the same procedures for a starter as with liquid yeast.

I still use a stir plate for most of my starters just because I paid some dollars for it. A stir plate is not necessary though. Making a starter in a big pickle jar with the shaken and not stirred method also works.

Much has been written about yeast and there is more to come.

Ok. Thanks for all the helpful information. What do you think I should do now that I made the starter with dry yeast and it had already been pitched? Should I add another packet of dry yeast? If so when should I do that? I don’t have access to a homebrew store, but I have some dry yeast coming in on Wednesday…

I think I might be good guys! Just got home from work and it is really cranking out into the blow off tube! 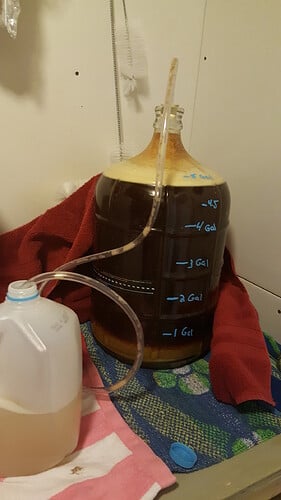 Thanks for all of your help. In the future I’ll either rehydrate the dry yeast, or simply use a liquid yeast with my starter. It is cool in Massachusetts right now so I regulate the temp in my basement with a dehumidifier and wrap a dark towel around my carboy. The temp is holding steady between 68/70 degrees.

I literally learn something new each time I brew. This is number 3 for me, so I’m really looking forward to continuing to learn and make better beers!! 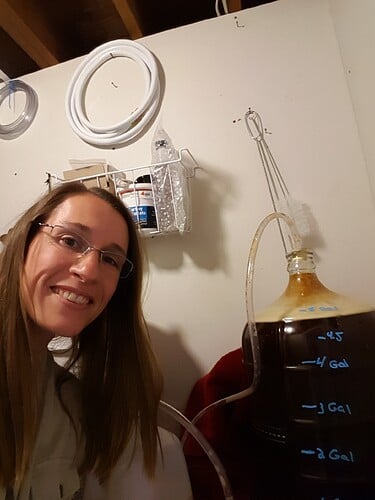 Glad to hear it! Next, let’s talk about getting you into a bigger fermentor… I can see why you learned about blowoff tubes so quickly!

Haha! I’m waiting for my catalyst to come in the mail!!

I basically agree with everything @uberculture said above with one addition.

If I’m planning a high gravity brew >1.075, (which is getting rarer for me lately) I may consider making an entire batch of beer instead of a starter. Something in that 1.050-ish range. Once it ferments out, rack the beer off to secondary or to bottles. Then pitch 1/3 - 1/2 the cake at the bottom into the big beer; some people just use the whole thing, and pour the new wort into the fermenter.

Basically, instead of a 2-liter starter, you do a 3-5 gallon starter. Plus, you get to drink the starter instead of dumping it.

Keep in mind that your AMBIENT temps are 68°-70° and that fermentation is exothermic (creates heat). So your ACTUALITY fermentation temps are likely closer to 73°-75°. This can create phenols and/or fusel alcohol. If you can, try to keep those ambient temps closer to 63°-64°.

Welcome to the forum! Please feel free to ask anything you have questions about! This place is a wealth of knowledge.

I did learn the hard way. Its beter to use a blowover hose. Haha

That is one thing that I was prepared for. I read through these and other forums daily. The problem I’m having is that every time I think I have it figured out I read something new and have an “oh, shit” moment. Hence my question in this thread. Buthe like I said, I’m really enjoying the learning process, and having a blast!

The takeaway is there are many ways to do it . No right or wrong just someone’s opinion. Just do what’s easiest for you. One pack two pack, rehydrate don’t rehydrate, make a starter or just pitch the vial it all makes beer. What I do is save my yeast in a mason jar and just repitch. That’s just what I do because I don’t need to plan ahead and also I don’t want to drive to the store just for yeast. Your right just have fun.

It’s a blessing and a curse doing homebrew in this day and age. Back in the old days, guys like my dad would buy canned hopped extract that was who knows how old, pitch year old dry yeast, and hope for the best. They made beer. Now, we have access to billions of ideas and opinions… it’s almost too much, but boy howdy is it fun. For what its worth, after a few years at this, I still feel like I learn something new with almost every batch I brew. I don’t tend to hang out at other forums because I’m pretty happy here, but feel free to post questions here. We’re all pretty helpful, even with the annual Christmas onslaught of people who got 1 gallon kits as presents and have all the same newbie questions.