Not sure if this is general, or something for the ingredient spot, but here goes…

I just received my 2nd ingredient kit, not from NB, an Irish red ale kit (F29) from BSG. I went through the contents and noticed the 2 cans of 3.3lb light LME have a BBE date of May 2015. I work at a vitamin supplement comp and know how to read the codes on the bottom, we use the same set up, lot#, item # and exp date.

My question is… are these actually bad? the tops of the cans are bulging a little, and Ive heard some talk that most dates dont matter. Im not takin any chances…This would of been my 2nd brew (not counting the failed mr.beet kit brews, and have gotten alot of exp stuff from them too…) and I almost done drinking my first batch, lol.

I have called that comp and told them, and now I have to wait up to 7 days for a refund, and can keep the other ingredients. Bad thing is, the box was opened and quality checked. Their QA notes are still on the box.

Sorry to hear you have a rough beginning to brewing, but my first was a Mr. Beer kit that got me hooked.

I would certainly not use an expired LME. Usually a bulge in any canned product is not good, can be from damage or expansion of some sort. Expansion in a canned product can be signs of something funky going on inside.

Keep it up, you won’t be wrong with a Northern Brewer kit. They won’t refund you if you have something expired either, they’ll send you fresh ingredients on them and pronto!

Thanks. I had a feeling what I heard was wrong.

My Mr.Beer exp was all bad, 3 brews and all took 4 months to have 1 beer come out good. I still wanted to do it, so went and got a decent real brewing starter kit. Wish I found this site before I found the other site.

First batch I made was an Oktoberfest kit. Came out alot better than the Mr. Beer kit. Kinda wheaty, nice bitterness to it. Have some trud on the bottom of the bottles, but I will be adding Irish moss to anything else I make to clear that issue up, along with the chill haze. Dont like not pouring it all into my glass. an ounce or so of undrunk beer, is wasted beer…

I too wouldn’t use it. Not only does old LME provide a funky, tart off flavor, it darkens tremendously. I would contact the store and exchange it.

Well, I guess the next question is, which extract would go best with the remaining ingredients? Was thinking of either the amber or the gold.

I checked the recipe that NB offers for the Irish Red Ale, and all the ingredients are different except the golding hops. Heres a list of the dry goods I have from the kit

Any thoughts are appreciated. Thanks

I would just sub the 6# gold LME like in the NB recipe, or add an equivalent amount of light DME. The 4oz special roast in the NB recipe is kind of like a crystal 50, so a little lighter than the 8oz crystal 60 you have. The 2oz chocolate malt is pretty similar to the roasted barley you have, but probably a little lighter in color. The other two malts in the NB recipe are very light in color, but will add some richer malt flavors. So I wouldn’t try to add anything to darken the beer - I think you have plenty of specialty grains, so you’d be fine with a nice light extract.

Can’t go wrong with an ounce of northern brewer for bittering and an ounce of EKG for flavoring.

Thanks, Ill leave everything as is and get the gold and see how that works. Already have the NB hops for bittering, I didnt see the EKG on their list, Ill just use the golding for the end boil. Will be my 2nd, so dont want to change too much.

. Have some trud on the bottom of the bottles, but I will be adding Irish moss to anything else I make to clear that issue up, along with the chill haze. Dont like not pouring it all into my glass. an ounce or so of undrunk beer, is wasted beer…

That’s just part of bottling, no matter what. If you want to avoid that, get a kegging setup and force carb.

What you’re seeing at the bottom of the bottle is usually just yeast. When you prime your beer with sugar, the residual yeast do a mini fermentation in the bottle, then drop out of suspension. No matter how clean your beer is and how carefully you rack, you’re going to have a little sludge.

Thanks, good to know. I was thinking it was still particles from the specialty grains kicking up. When I racked to the bottling bucket, it was still real murky and dark, looked like really watery mud. 3 weeks in the bottles they were crystal clear at room temp, looked like only water in the bottles. got a bit hazy after 1 day in the fridge and a bit hazier on the 3rd day and stopped.

I am planning on kegging some time soon, I hope, but dont have the funds yet. Theres so much stuff I want to get now after watching alot of the vids off NB site and brewtv on youtube.

I still plan on doing a secondary fermentation, adds 2 more weeks, but Id like to get rid of that chill haze, I can live with the yeast on the bottem of the bottles till I get to kegging.

Try gelatin? Usually clears brews fer me . But I don’t know if you mashed out too high of a temp you will proteins that will cause yer haze when chilled… Sneezles61

Well, got the Millard gold and some irish moss ordered. Also just ordered the Darkstar 2.0 burner. Found out tonight my sis doesnt like the smell in the house. I love the smell. Way better than her tofo kim-chi soup she makes, worse than rotten feet…

Ill keep you all posted on how it comes out mixing the 2 recipes, since the 2 kits have different dry ingredients. And thanks again for all the input. The other brewing forums ive been on havent been very nice or forthcoming with help.

havent played around that much since I just started full on brewing, not counting my Mr.Beer brews. But ill keep that in mind.

Well, the Irish Red is done. Was a little worried I wouldn’t hit the OG since I was using less lme by switching it to a different kind. Hit it dead on. Sadly, I broke my hydrometer, thankfully, after the reading. Time to shop for a new one, lol. 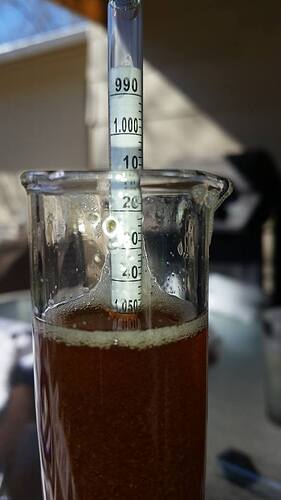 So this is yer SG reading, starting gravity…. Looks good too! Sneezles61

Yeah. Thought it would be a little low. The bsg kit calls for 6.6lbs of the Muntons amber, used 6lbs of the mallard gold. I’m thinking it will be a bit lighter in color when it’s ready to drink. Starting OG should be 1050, which thankfully I still hit.

That does look good, I brewed an all grain Red Ale and hit 1.048. Came out really good. Just shared some at a party for the NCAA game last night and everyone loved it.

Good job with your brew.