So I, like all home brewers, want a brew sculpture. I like doing things DIY, but is it better to buy prefab, given the open flames? I don’t know how to weld. I’m thinking 15 gallon batches, but I won’t necessarily be making that leap yet. I’m currently using a turkey fryer. And I move about once a year, so relative portability is key. Also, I live in Detroit, so I’m fairly broke. I’m thinking all said and done, it might be cheaper to get a more beer sculpture or something…

Is a brew sculpture like a bust of a porter or something?

Haha, no, it’s more something like this: http://morebeer.com/search/103502/ or the Blichmann Toptier system

I’m just a few miles North of you in Troy and this is what I built for about $1200 including twin CFC’s, March pump, 25 gallon Megapot and everything else. It fits in a pickup truck laying on its side no problem. More pics/info at www.mullerbrau.com 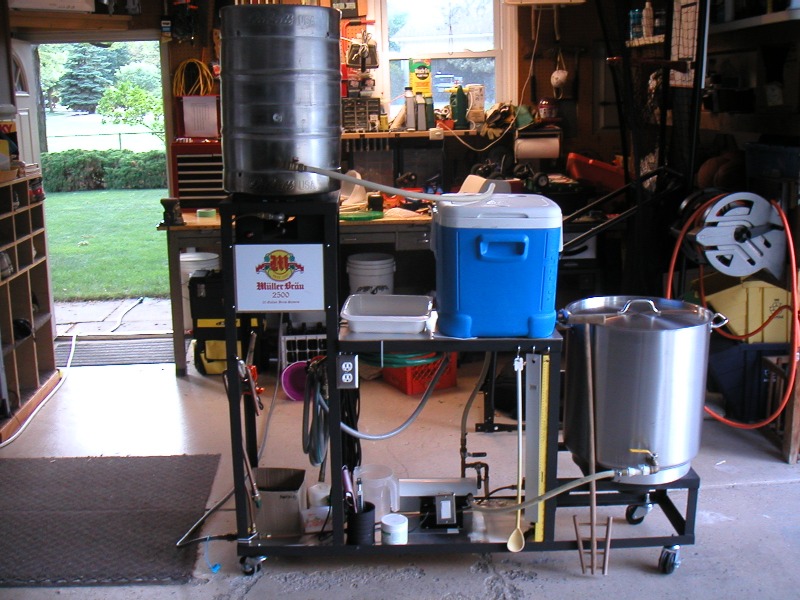 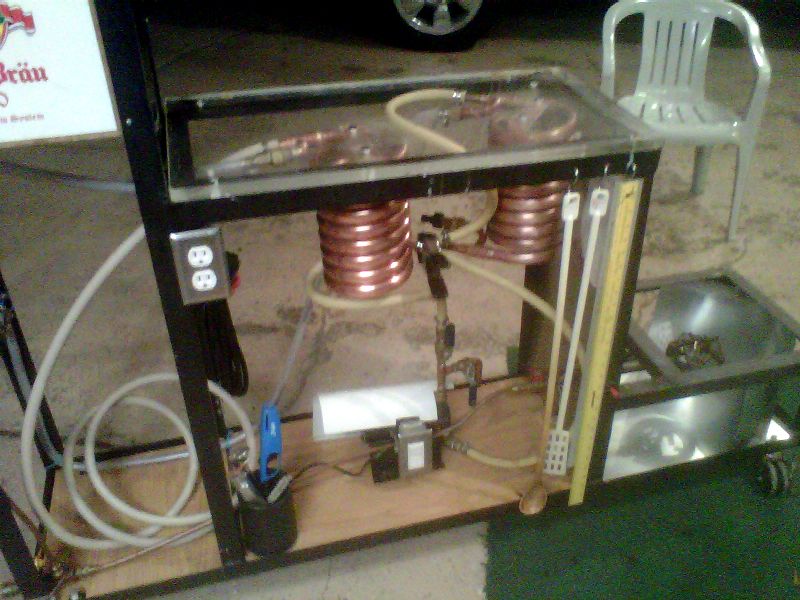 I always love looking at Greg’s brew wagon… such a work of art.

On the other hand my 20 gallon rig fits in the corner of the closet when not in use.

and all spread out

Im pretty sure he meant sculpture…

I built my brewing rig from a used factory cart I got at an industrial surplus yard. I paid about $50 for the cart, and have about $300 more into the March pump, paint, electrical and plumbing fittings - some of which I already had on hand. I found a friend of a friend to do some welding for me - the drop-in burner frames and a few extra supports - in exchange for some homebrew. I did the rest of the build (electrical, gas and water piping, etc.) myself. The “mast” and the water line and valves on it can be removed with two bolts and a pipe union, and the whole works fits in the back of my 2006 Toyota Highlander with the rear seats folded down.

If you have the money to buy a Top Tier or MoreBeer sculpture / system, go for it - but I think you can probably find a way to do something DIY that would cost less and be a lot of fun. Mine took several months from start to finish, but I like tinkering-around and building things almost as much as I like brewing - so it was a really satisfying project. This is a Brew Structure

I built my sculpture using old outboard motor shipping crates that were given to me. You can see the dunnage on the bottom shelf. They were made up of 1.5 inch angle and 1x.5 inch tubing. I was able to scrounge and cut what material I needed from the crates and had a friend weld it all up for me. The burners are the 10" banjo burners from northern brewer (I had a local sheet metal shop roll the wind shields for me; about $14 a piece). The most expensive part of the project was the liquid and gas fittings and lines.

The large wheels on the one side is so it can be easily wheeled over uneven terrain or grass, there are slide out handles on the opposite side. The pump is plugged into a switch outlet combo which is wired to a GFCI cord from a pressure washer.

Here are a few pics of it in storage and in dirty disarray:

You can bolt the frame together with high grade bolts, no welding necessary.

On a 15 gallons system the most expensive parts will be the kettles.

Here’s a link to some info on my 20 gallon system:

Also check out this site for more ideas: http://www.brewzilla.nl/?brewhalla