I have noticed that the new dark star 2.0 has the banjo type burner in it. Anybody have a comparison between it and the blichman? I have an old dark star and it works fine but I really hate the soot on the pot. I am in the market for a second burner so I am considering the Dark Star 2.0 but would like to know if anyone has both and can offer comparison results.

I just got the Blichmann burner myself. I had a Turkey fryer setup with a similar banjo style burner used on the Darkstart 2.0 previously that I had to crank up all the way to get to a boil in about 20 mins for a 6.5 gallon preboil volume. I’ve not run the Blichman past 1/2 way open and can get to a boil in 10-15 mins easily. I ran my turkey fryer around halfway open to maintain the boil. I turn the Blichman down to 1/4 or less and easily maintain a boil. It’s much more efficient, it’s much quieter (no more jet engine sounds in my garage while brewing!), in my humble opinion, it’s worth every penny. I wasn’t sold on it until I saw it in person.

Take a look at the size of the banjo burner in the Darkstar 2.0 compared to this: 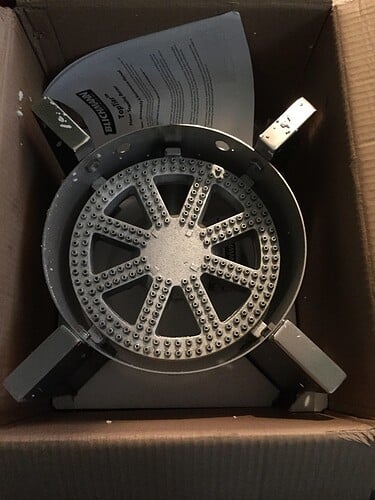 You are really talking two different levels of burner so it’s not a completely fair comparison. I have a friend who has the Darkstar 2.0 who’s actually coming to brew a double batch with me this weekend. He has been pretty happy with his.

ONe issue holding me back from getting the blichman is that I hear it tends to blow out in the breeze. I brew outside and there is typically wind. My old darkstar does not blow out. Do you have any opinion regarding that?

I brew in my garage about 4’ inside the door with the door open and used to use a 3’x4’ piece of plywood leaned up against a sand bucket about 8 inches in front of the burner to prevent my turkey fryer from blowing out. The windshield around the burner on the Blichmann is large enough that I don’t even use the plywood to block the wind anymore. That being said, I only have wind coming into my garage from one direction. I would be very surprised if wind would blow it out, but maybe others can offer some feedback in relation to that.

I’ve had my blichmann blow out, but it takes a HUGE gust of wind to make that happen. It’s a fantastic burner. I’m boiling 15 gallons of maple sap with it right now - it burns hot and efficiently. Wouldn’t hesitate to recommend it.

I bought the Bayou Classic SP10 from Lowes for like $50. I think it’s rated at 55,000 BTU and has a 10 PSI regulator. I think the older version of the SP10 had a higher rating (something like 185,000 BTU) and a higher ( I think 30 PSI maybe) pressure regulator. It burns nice and clean with a blue flame and had no issues with soot. Has a large wind guard. Worked great with a friends keggle and 7 or so gallons of wort but you need to put a larger grate on top of it to hold a keggle. Bought it because I could get it locally and also there are a number of reviews from homebrewers. The most common Bayou Classic burners I found homebrewers use are the SP10 and SQ14. Should work perfectly for my new kettle.

It seems as though the cast burners are all about the same. Somewhere, someone decided to clean up some of the casting, such as you would do for a carb on an older gas engine. That allows the gas and air to move easier to the burning ports and mixed more efficiently with combustion air. The big difference other than that is either a low pressure regulator or high pressure regulator is attached, and with the high pressure regulator you will need to fiddle with the air plate to accommodate a cleaner burning flame at the end. And, of course the wind shield around the burner helps when the wind is a blowin’. Sneezles61

I was recently given a new Blichmann for my birthday. Im eager to try it out!