If you asking about the IBU/OG ratio it is style dependent.

That is such bullshit. Balance is whatever you want it to be.

Cmon Denny don’t beat around the bush. Say what you mean man!

This is my first trip back to the NB forum in quite a while and I’m instantly reminded why I hate the board design changes. Whoever allowed this to happen should be ridiculed.

Well, I sort of have to agree with Denny. I looked at one of my recipes and see that is is very low on the balance scale, but I tasted it yesterday and I am very happy with it. But my initial question was really more to do with the scale itself. Clearly, there is some reasoning behind the idea of balance. It’s like any other scale, and it BS if you focus on it. But I like to understand how the scale works so that I can have an understanding of how things are “supposed” to be. It’s analogous to movie reviews. The movie critic rates a movie based on some set of criteria. In the end though, I find that I love “Attack of the Killer Tomatoes” while I am no fan at all of “Silver Linings Playbook”. So you see, I am just looking for what the “experts” say is how things should be.

I don’t use Brewtoad, but I would guess it’s using something similar to this: 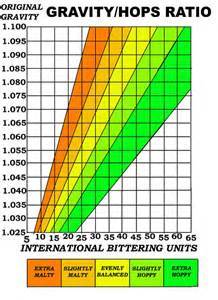 I wouldn’t quite say it’s BS, but you need to put it into context, and like @brew_cat said, it’s style dependent. An IPA should be in the “extra hoppy” range, and a wee heavy should be in the “extra malty” range. Depends on how you want the finished beer to be, though. Of course, this is just a high-level generalization, so keep it in perspective.

I don’t use this kind of chart to help me make decisions, but use it as a reference point on a beer I’ve already made. As in, if I make an IPA that I want to be extra hoppy, and I’m not quite happy with where it ends up, I might check this chart to see where it falls and adjust accordingly on later beers. But I wouldn’t ever use this chart to tell me how many IBUs to target before making the beer.

And of course, there are a ton of exceptions. If you use a lot of crystal malt in your beer and end up with a very high FG, then that will change the perceived bitterness. Likewise if you use a highly attenuative yeast, a beer with lower IBU will be more bitter, likewise changing the perceived bitterness. So it’s a HIGHLY subjective reference point.

Not only is it style dependent, it’s taste dependent! Who made that balance scale? How did they decide it should be like that? Do they even define what “balance” is?

Exactly… I find it useful as a reference point, but that’s about it.

I don’t use the scale but I did reference it when I first started doing recipes as a starting point. If I had the time or inclination I might check where my favorite brews are on the scale and use the information. It’s just another detail so I agree with @porkchop it’s not total BS. But I agree with you @denny if it tastes good to you its balanced

Personally, I like the chart. Just like I like the whole BJCP style guide; I see it as a baseline more than a standard. When I’m working on a recipe, if I know the style I’m riffing on, I can use tools like BeerSmith and go more, or less on anything. It’s a great way to dial-in on the beer I want to drink.