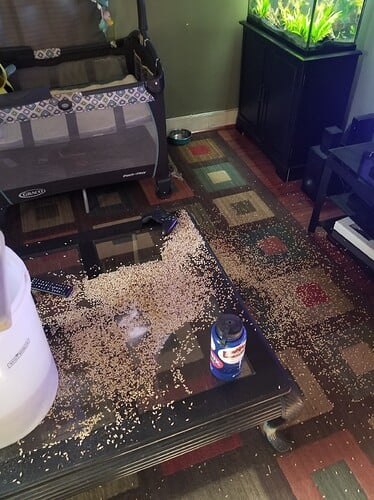 Had some fun a few months ago while milling my grain in the living room. I had the mill on top of a 10 gallon bucket and was holding the drill with one hand. Well, then it grabbed and took the entire mill, with a full hopper full of grain, and scattered it all across the floor Haha. Luckily it didnt wake up the baby. Anybody else have a disaster story to share?

I had a mill mishap like that. Did wake the neighbors

Yeh. That whole batch was a disaster for me. Had been a few months since brewing and something really nasty and green grew in my ball valve. I filled up my kettle and saw green floaties so decided to open the valve and drain it. Needless to say, nothing came out Haha. It was a solid mass of mold or something furry green and black. The brew that didnt want to be brewed.

If I could only type some stories without it taking hours… The moral to my story? You can’t have a story or two without experience…

James and Steve on basic brewing radio do a show every December on brewing disasters and I always get a kick out of it. Some interesting stories

This is why I made signs in my beer diary; wash, rinse, sanitize.

From bottle bombs that drew blood to boilovers back in the extract days, where do I start.

The most “disastrous”/painful occurrence was opening my kegerator to find all 5 gallons of a sublime cream ale, plus the 10 gallon CO2 tank had leaked out through a two dollar cobra tap…

Yup done that to. Also woke up the neighbors

My first attempt brewing was with a friend, and neither of us really had any idea about the correct conditions etc. regarding homebrewing.

To make a long story short, we didn’t really sanitize either our equipment, or ourselves and our beer got contaminated, we might also have screwed up the wort, i don’t really know to be honest, we didn’t exactly analyze our wrong doings then. It did inspire me to actually learn about sanitizing and avoiding contamination, because i sure don’t like wasting money and especially not wasting potentially good beer!

I made an article inspired by this on my own blog, if you wanna read it you can click here, (i know, shameless self promotion, sorry).

Last night I had a dream that I was half-way though doughing in when I realized that I hadn’t milled the grain! Does that count?

Oh dear Barbarian… You got too much brewing on your mind… But in the minds eye, you could count that… Perhaps.

I could n’t mention as they are time consuming to list all of them.

I didn’t take pictures but my worst brewing disaster was an exploded glass carboy back in 2006. Probably my 3rd batch ever or so…

I was fermenting a very excitable batch of Honey Kolsch (if memory serves me correctly) and the blow off tube became clogged during the primary fermentation. The stopper did not budge a bit because when i got home, there was a top (carboy neck) sitting on the base (carboy bottom) and the tube was still firmly seated in the neck! Those two pieces were the only sections of glass bigger than say… 3x3 inches. Everything else was tiny bits!

There was wort on the ceiling, shelves, door, walls… pretty much everywhere. I was cleaning hops, wort and glass off of every surface within throwing range of the carboy for hours. I learned a great many things that day, the least of which is NEVER put a bone dry rubber stopper in a primary blow off tube without adding a smidge of foodgrade lube. Just a LITTLE is all it takes but would have prevented this catastrophe. Other takeaways were:
-brewing can be dangerous
-don’t ferment (at least primary) in open, common areas where people/kids/pets may be roaming around
-monitor your primary fermentation closely and frequently
-always use a large blowover tube… the little (3/8?) one’s just don’t guarantee the hops will be allowed through

Probably other lessons to be had there but that’s what i can remember.

That crazy. Those glass carboys are dangerous

That is pretty wild!