I have come to the realization today that some types of beer bottles don’t cap nearly as well as others. I’m so happy to have finally figured out this issue since I had been assuming I was doing something incorrectly with the priming sugar. Some bottles were much better carbed than others. Maybe this is common knowledge to others but just thought I should share. The bottle on the right side is much tighter, which is fairly visible from the pic. You can also clearly see the design style difference. Hopefully this helps another home brewer out.

The difference in the crimp is obvious and their is an obvious difference in bottle style. Do you have any idea which brewery each of the two bottles styles were from?

I’ve saved so many bottles from so many brewers I couldn’t even guess. Just going to get rid of the bad ones going forward and make sure I only bother cleaning the good ones. Also, I’m just using a royal crown bottle capper. Maybe it wouldn’t make as much difference with a bench capper.

I also have different luck with different caps. NB changed their suppliers a bit, and I had horrible luck with the Fermentors Favorites.

Can you post a “head and shoulders” shot (example below) with the caps removed? Maybe someone in the forum will recognize the bottle type. (I’m going to assume the one on the left is not a “screw top” bottle.) 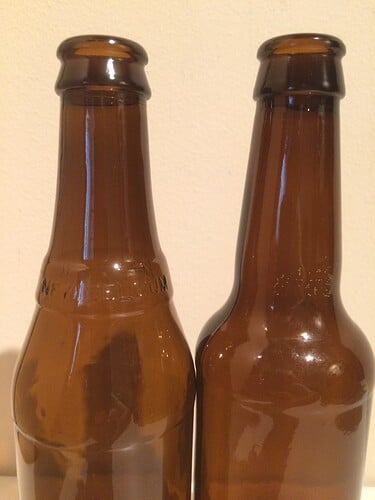 Certainly not a screw top. A very simple bottle. No distinguishing marks. 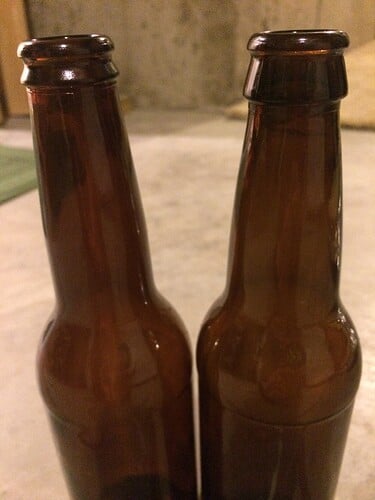 So, cool to see the diff, the right one is more of an abrupt top, the left just keeps going round and down. So now off to the chase… which is best. Sneezles61

The one on the right wins!

The bottle on the left has a shorter shoulder which makes them hard to use with a hand crimper.
A bench capper is the best for those. You’re not relying on the forks to grip the bottle.

Get a bench capper, then both bottle styles are awesome! And you won’t shear off the top of the bottle after a half dozen uses.

Seriously, the ones with the short lip won’t work with a wing capper. But wing cappers suck - get a bench capper if you’re going to bottle long term.

I also had the same problem and discovered that it was the bottles with the smaller bottom bell shaped lip that was the issue. Never got a tight crimp on those bottles. Got rid of those bottles ( about a dozen) and haven’t had a problem since. I don’t have a bench capper either and use a wing capper. What bench capper would you suggest?

I have the champagne floor corker. You can get a bell adapter for it to crimp 26 and 29mm caps. It’s a bit spendy, but well made and worth it if you need the ability to cap and cork bottles. I do roughly 750-1000 bottles per year, so it’s a real necessity.

I’ve had the Super Agata bench capper for about 10 years. Height is adjustable for different beer bottles. It is not designed for the heavier duty work of corking.

There may still be a bench capper model called the Colt for sale somewhere. Cheaper than the Super Agata but the quality wasn’t there.

I had some bottles similar to the one on the left. I think they were and English beer. I had the same problem because my wing style capper could not grab onto the shorter “shoulder” or whatever it is called and had to be very careful to make sure they sealed. Finally gave up on them and tossed them in the recycle bin.

A bench capper would solve this but new bottles are cheaper than a new capper.