My question, any thoughts on what that would do to the flavor? Pretty fair bet that the taste would be a little more intense, but would you expect any off flavors or an imbalance? And would the Wyeast 1728 or S-04 have the alcohol tolerance to take advantage of the higher o.g.?

This would probably work, but you may have a difficult time getting a thorough mix of the wort to track the change in SG. The bitterness ratio (BU/GU) will change. Don’t know if it would change enough to be noticeable though. A recipe calculator, like the one on the Brewers Friend site, may help without taking multiple SG samples.

Honestly, this was my last extract kit I brewed because it was on sale. I brewed the imperial stout extract kit last February and my OG came out at 1.100. Sadly it finished out at 1.036 which is about 15 points high for the target. I will blame myself for improper aeration and temp control. It turned out at 8.38% according to my calculator. I used one pack of US-04 for mine.

I would describe it as mildly sweet because it didn’t finish out where I hoped to get it so I would prefer a drier finish. I am currently enjoying a glass as I type this because I aged it in the keg since March.

I will say it’s a damned good beer, even if it did turn out a bit sweeter than I would have hoped for. FWIW it made an AMAZING chili! 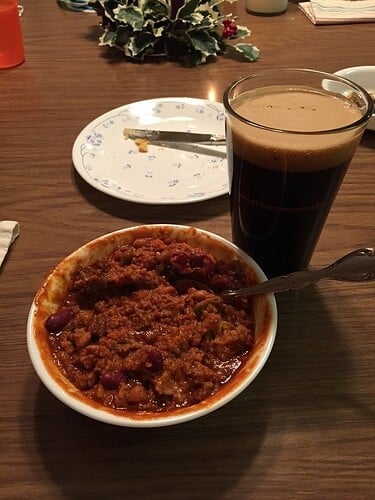 If you are looking for straight alcohol content, I would say go for a barleywine before I would intentionally doctor a kit by reducing the volume. You may end up with a boozy mess that kills your yeast.

Have an extra bowl of chili! Those two in combination look great!! Sneezles61

Rads shameless plug for his chili

Seriously you can boost the ABV with table sugar and hardly notice it. Might thin the beer slightly but not much. Or like brew_cat said add DME.

I’m not sure with a beer that big to start with I would even bother. Aerate well and keep an extra packet if yeast on hand. Just in case.

Maybe even read up on ‘day after’ aeration. This is where you add O2 after a day or do of pitching to provide the yeast the opportunity to reproduce and finish a higher OG beer.

But if it were me I would brew a 1.050 beer and pitch the entire slurry.