I know of a guy that is getting rid of is gas stove, it is a simple 4 burner stove. I had a thought pop into my mind.

Does anyone think I would be able to disassemble the stove top re-do the plumbing and arrange the 4 burners in a very close pattern(or three in triangle) to make one larger burner?? It would still be 4 individual burners but close enough that they may all fit under one boil kettle.

I don’t want to offer any money for this thing if there is no way it can be done, so any appliance technicians out there that may be able to shed some light on this idea???

How many btu’s does a normal natural gas burner put out??

Thanks for any input!! :cheers:

You could, but it would be huge and cost more than just buying a nice burner.

I took a look at the stove that I may get. Looks like it has a simple manifold off of the regulator that gets hooked up to the supply. From the manifold it looks like 3/8" aluminum tubing to the burners or something like that. I could either cut the tubing if needed or bend the tubing to keep the manifold setup.

Yes it would be some work to set it up, but I think if I could get the stove for $40 it may be cost effective to modify.

I figure if it will cost me 60-90 then I would just buy a good burner made for brewing. So that I feel is my tipping point, if it cost’s way less then a good brew burner then I’ll do it. The materials used for a stove are quality for the most part and I think it would last quite a while.

If you could get the stove for free it might be worth messing with, but 40 bones would go a long way toward the purchase of a proper burner, heck whole turkey fryer sets can be had for that or a little more. If you’re just itching for a project spend the money on material for a stand, which you’d have to do for the stove convert too, and a burner like this for $21
http://www.topfoodservice.com/Merchant2/merchant.mvc?store_code=TFS&screen=PROD&product_code=KECAB006
: 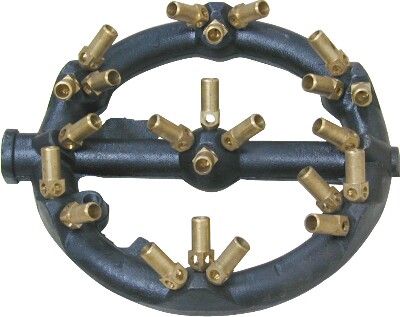 It depends much on your own skills and what you know or can figure out for yourself as so many stoves are very different from each other though they seem similar.
Basically yes it can be done and probably not very hard to do. I’ve done a lot of stuff like that using burners from gas stoves, gas water tanks, and even electric stove burners to build ovens.

One thing though is when I do stuff like that I am using a free stove or something I picked up at a scrap yard for $5 or less. I agree if you have to buy the stove for much maybe be better to just buy a burner.

If you decide to look further into using the stove then take a good look at the oven burner, It just may be better to use than trying to rig up 3 from the top.

Thanks for the input. Whatever I do I will want it to run on natural gas for convenience. I know my skill level is up to the task and I do have scrap metal in my garage for the stand. I just need to get that stove for next to nothing.

I’ll take a trip to the local scrap yard and see if they have any stoves that I can buy.