Best pils in a long time

Went to a Onco Fermentations in Tully and saw they had a plis( Not Complicated). I enjoy a good pils and a lager. I bought 2 can Friday and drank one of them. Told the wife that I am going back to get 2 more… if that is ok. It was light in color and the flavor OH MY. I am brew this weekend and getting more of that, Not Complicated Pilsner. The beer brewing is going to be my first dry hop. NB kit Karma Citra?

Thanks for posting I have not heard of this brewery. Is this in the Finger Lakes?

Pilsners can be crazy good. They are a good every day beer, and often get lost in the overhyped beers of the year. Not necessarily the easiest to brew, where like a helles, flaws have nowhere to hide.

Brewing a nice clean lager to me is like the holy Grail. I’m always brewing them with some success. Every once in a while I’ll brew an excellent one but then can’t reproduce it.

I’ve got a Pilsner in a secondary now. The color is the tiniest too dark to begin with but I’m still optimistic.

The history of the Pilsner is a good story.

Pilsner (also pilsener or simply pils) is a type of pale lager. It takes its name from the Bohemian city of Plzeň (Pilsen), where it was first produced in 1842 by Bavarian brewer Josef Groll. The world's first pale lager, the original Pilsner Urquell, is still produced there today. The city of Plzeň began brewing in 1307, but until the mid-1840s, most Bohemian beers were top-fermented. The taste and standards of quality often varied widely, and in 1838, consumers dumped whole barrels to show t...

I’ll believe we are so lucky to have Pils malt with diastatic power… Them pioneer Brewers didn’t have the luxury… They musta figured out how to put just enough “diastatic” powered malt to convert Pils…
Do you Pils Brewers go 100% Pils malt then?
Sneezles61

Have you done a side by side with ale yeast and lager yeast… Then lagered?
Sneezles61

I’ve not done side by side but I’ve brewed the same recipe with American ale yeast and German Ale yeast. It’s good but not the same. You have to slow down the fermenation. German Ale (Alt yeast) is a good choice because you can ferment at 55° and get that slow burp

I picked up a six of Urquell yesterday because I’m out of pils. So good now that they’ve gone to amber bottles.

I’m brewing an “american light pils” right now or maybe it’s mexican…pilsner and flaked maiz shooting for something just under 4% abv but I think I blew it. 1.037 preboil…damn high efficiency makes it hard to predict smaller beers.

I have on occasion added a bit of carafa special to my pilsner attempting to get that unusual Urquell color. I’ve never gotten close to the color even with decoctions which are just too much work and don’t tend to produce a better beer in my opinion.

I did a hockhurz mash on one a while back…damn long brew day and only difference I detected was a slight bit more mouthfeel and insane head. I can get that with carapils.

The more, the merrier… But it just needs to be a 4 day ordeal… Then move on…
That’s like a yesteryear kinda… well, there will be other ideas now…
Sneezles61

They are in Tully NY , just south of Syracuse.

I think the hopping on this one was dee-licious. Had to look it up : German Pilsner v2 | German Pils All Grain Beer Recipe | Brewer's Friend 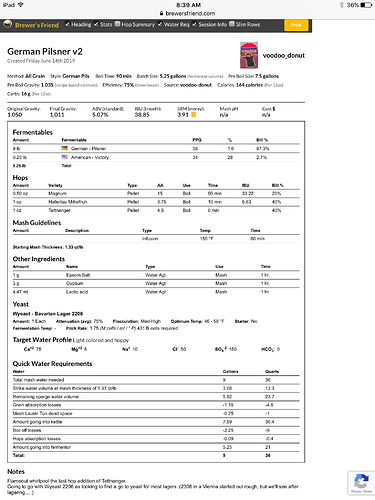 Edit: If you “select” the image it clears up. I took the screen shot because the URL above closes after awhile I believe.

So I read some of the highlighted footers at the end of Squeegee’s clicker… I have not read Michael Jacksons “beer hunter”, but he was voicing the true Pils may becoming extinct… This was back in the 90’s (?)… He pointed out a concept that seems to make sense… The original Brewers of the Pils are trading in their square, shallow fermenters for tall stainless steel fermenters… Which he claims forces more of the malt characteristics to be lost due to CO2… The way the yeast contribute its flavor is also lost due to head pressure too… And the yeast combo’s are slimmed down…
I will need to get his book…
Sneezles61

I see in your notes that it starts rough and clears up. Can you elaborate?

IMHO, bitterness defines a pilsner along with the pilsen grain flavor. The total IBUs in a pils are less important than the actual bittering charge. Take @voodoo_donut 's pils recipe as an example. Total 38 IBU getting about 5 IBU from the late flavor/aroma charge and 33 from the 90 min bittering charge.

I like a bitter pils but I also like using yeast that focuses on the malt because i believe some of the bitterness or low level “astringency” for lack of a better word comes from the grain flavor, but I degress.

I generally bitter my bohemian pilsners to around 30 IBU with the 60 minute charge, 90 mins in Voodoo’s case. I’ve brewed many pilsners with no other hops than the 60 minute bittering charge.

I find the late charge gives it a little of the spicy aroma of the noble hops I prefer in my pils, so generally do a 5 minute addition and don’t really concern myself with the additional IBUs because they’re not perceived as bitterness in the final beer.

Sorry for the long and circuitous route to answer your question with…“really doesn’t matter it’s probably personal taste”. If you look at the BJCP guidelines for the style the sought after aroma is the grain and yeast aroma and hops are a minor contributor. “Hop aroma may range from very low to a medium, spicy or floral hop presence.” Having said that if you want to take @sneezles61 approach of more is better like in an IPA, have at it and report back your results.