I brewed a barley wine with Safale US5 yeast on 1-26 Below is what it looks like now. The OG was 1.080 and is currently at 1.015. My question is about the appearance of the surface of barleywine. Being new to homebrewing, I have been reading a lot of articles but wanted to know if ,first, does this look okay? and second, Am I correct in thinking it is still very much active? lastly, What is the best indicator of knowing when to move it to secondary?
. 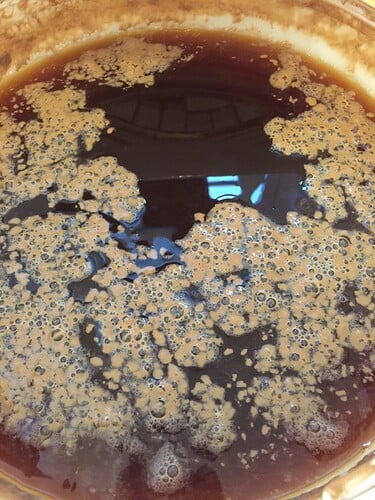 Looks like you have frothy bubbles from the CO2 produced in the fermentation coming out of solution. The tan irregular discs are yeast rafts. The top of my Caribou Slobber has the same yeast rafts. Your beer looks okay.

There may be some residual fermentation activity going. Really the only way to know when the fermentation is complete is by stable SG readings. Most often the readings can be taken several days apart. For big beers like this one more time is needed between readings because the yeast will work slower in a high alcohol environment. I would take another reading in a week. If you think the second one may be lower, but you aren’t sure, take another sample a few days later. Be sure to correct the SG readings for temperature if the temp of the beer is changing.

Extra time in the primary will not hurt the beer waiting for the stable SG readings.

Two weeks from brewday for a 1.080 OG beer may be done with active perceptible fermentation, but an additional week or two definitely won’t hurt things. If you rush bigger beers, they don’t have the time to blend and you may notice a bit of a harshness or alcoholic bite to your beer. I brewed up the Lakefront Bridge Burner clone December 6 (1.090 OG) and I would say that I technically rushed it to the keg December 31 (due to a supply problem on account of too many friends over for the holidays.

) This beer uses a 10 day dry hop and has turned out really well but it’s gotten better as it’s aged in the keg and smoothed out.

To add a different perspective (from an old fart longtime brewer), yes, your beer looks fine. And yes, leaving it primary a bit longer is not a bad idea.
On the other hand the way I do it (and the way I’ve done it for 35+ years) would be to carefully rack it into a secondary carboy at this point and leave it alone for as long as possible (about 8-9 months is average for me). I make this stuff a few times a year because I like my Barleywine/Burton/OldAle/whatever you want to call it to be well matured as per tradition, and always like to have some on hand ready to drink (it’s even more amazing after 5 years if you can keep some around for that long). Having it age in a secondary carboy has the added advantage that since it is not kegged immediately, the brew is out of the way of temptation to consume it too soon, before it has reached it’s best potential.
In moving it to a secondary vessel, you will still get a the last bit of fermentation activity and since there will definitely be some yeast still in suspension after transfer you will still get the beneficial “cleanup” activity often referred to in these forums; also, a long rest period will smooth out the harsher ‘boozy’ alcohol flavors often inherent in strong brews such as this.

So there’s no single correct way…and sometimes, the time honored old fashioned methods work best. Individual experimentation is the best path to finding a result that meets your own expectations/standards.