I want to brew a Baltic porter. Any advice or recipes. I was looking at this Framinghammer Recipe
Published: 2015-03-25

ALL-GRAIN
Jack’s Abby Brewing, based in Framingham, Massachusetts, is a lager-only brewery known for breaking away from traditional lager styles and brewing creative and innovative beers. It was named the best brewery in Massachusetts by Rate Beer in 2014 and has won many awards at various beer competitions throughout the country, including a gold medal at the World Beer Cup 2014 for its Framinghammer Baltic porter. Founder and Brewer Jack Hendler has scaled down a version of the recipe for homebrewers.

If you are fermenting with a lager yeast, reduce cooling to the beer to let it to warm up to 60°F (16°C) when the gravity reaches 1.040–1.045. This will allow for full attenuation.

YEAST
German Lager yeast, or a clean neutral ale yeast such as a Kolsch yeast

BREWERY DESCRIPTION OF THE BEER
Big, bold, and black. This unusual lager style has many similarities to imperial stouts. A lengthy conditioning period creates a silky smooth, chocolaty mouthfeel enhanced by the use of oats and brown sugar. Noticeable sweetness gets balanced by roasted malt and hops bitterness. At 10 percent ABV, this beer is sure to keep you warm on a cold winter night.

We were between something like this and a doppelbock for our last brew (Sunday 11/1), we went with 14 gallons of Jamil’s doppelbock and now I’m bummed because I LOVED this beer when I had it.

Looks like a great recipe. I would make sure you have a LARGE slug of yeast to pitch. Definitely go with the german lager yeast with multiple starters (I would lean toward wy2206 or wlp833 i believe is the wl equivalent), or I have had great results brewing 5 gallon starter ‘steam’ beers with 34/70, fermented at 60* for 5 days, then 72* for 5 days to get a big pitch of lager yeast together. I actually used 2206 in a steam/cal common one time and made a great beer, plus I had yeast for my marzen.

There does seem to be a decent amount of roasted barley in there for a baltic (should not be roasty). Maybe sub midnight wheat/blackprinz? Also, simple sugar seems weird in a Baltic. Not sure why you would want to thin the body out with an ingredient like that. Then again I love the commercial beer, so why mess with it…

Also max out mash tun/kettle/fermenters to brew as much of it as possible so you can have some to age. IIRC you brew 10 gallon batches?

I was wondering about the brown sugar myself. I have to adjust it for my efficiency since I generally get much better than 65%. Your right I generally do 10 gallons. I have 2 jars of 34 /70 saved maybe make another helles to get more yeast. What’s the purpose of the warm fermentation?

I was wondering about the brown sugar myself. I have to adjust it for my efficiency since I generally get much better than 65%. Your right I generally do 10 gallons. I have 2 jars of 34 /70 saved maybe make another helles to get more yeast. What’s the purpose of the warm fermentation?

Basically so it works and ferments out more quickly, I essentially make a hybrid style with my lager yeast of choice. Turns out it makes a solid beer! If you have time, may as well make a proper lager with the lager yeast.

I actually have a Graff ( 80% cider 20% pale wort) on a lager yeast now. Think I can use the slurry from that.

jk, I’ve actually been dying to try a graf.

Scaled the recipe to 3 gallons. I’ll bang that out Thursday. Then leave everything set up for a 10 gallon batch of something else for the weekend. Maybe an Amber and a Belgian split. Got to get a supply built for the holidays.

When I transcribed the framing hammer recipe and adjusted my grain bill I thought I was looking for .090 and ended with .088. Not a big deal but I looked at the recipe and see it calls for .096. Do you think I should add some DME in the morning before I pitch or let her ride? Just looking for opinions.

Just an update. I did end up adding a lb of DME and I just tasted this and if came out awesome. A beautiful looking beer and it tastes great. I havnt had the original but this is a great recipe. I’m going to see if i can get the recipe for their smoke and dagger. That I have had before but only on tap and on nitro.

Our doppel has been lagering for 2 weeks and I want to drink it now.

This one’s going to take patience. 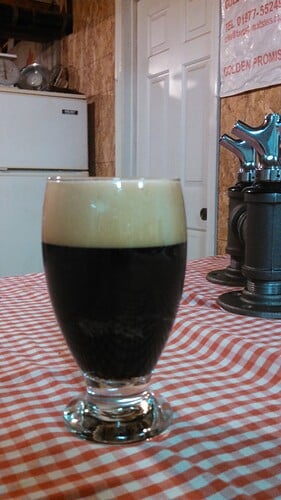 handsome indeed. Ours looks a little lighter in color in the hydrometer, but that could just be a result of the thickness of the hydrometer.