Is bagged ice from the store safe to add to add directly to extract wort to chill it? The FDA says it is considered food and is monitored blah blah blah. So I’m in a situation where it is difficult for me to even chill the wort,except with and ice bath and the tap water is in the 70’s. Would love to bottle and chill some in the fridge but with only one fridge and it’s not that big, that is tough to do.

It would be nice to use an ice bath to get it down close, dump in some ice then top up to five gallons with the warm tap water. I did make a starter with the Hothead (Kveik) yeast so it should take off quickly.

Me got the same isue here on the island. But to cool my wort. I put the kettle in a ice bath. Swirl it around. It works perfect. Got it down. To 68. Than pitch my kviek yeast. The other thing i did made. A wort chiller. I run it true a ice bath. The water circulates back in the ice bath. I do use a. Bildge pump for this. Works good. But takes longer to cool the wort

I don’t think it would be worth the risk. You could probably knock down the initial temperature from 212F to say 150F-ish with minimal risk. There are still plenty of people getting sick from supposedly “FDA-approved” sources, so I wouldn’t count on it being sanitary. But once below 150F, you’re at a big risk of bacteria being able to grow, and grow quite rapidly at those temperatures.

The Kveik strains are supposed to be able to outcompete other microbes, though, so it might be ok. And I’ve pitched that yeast at 100F, and it still comes out pretty clean. Takes off like a rocket, too.

So I guess my answer is no… or maybe yes… or maybe it’s maybe.

I would be leery of store bought ice. The ice is from an unknown water source. Water could contain chloramine. The bag may be punctured and then stored in a grocery store freezer that has never been sanitized.

Use an ice bath but before adding the ice fill the sink with your not so cold tap water. Swirl the wort gently with your boil spoon to speed up the heat transfer. Have the lid only partially on for stirring. When the water gets hot replace it with more cold water. When the second sink fill of water warms drain and pour in the ice with cold tap water. You can add a pound of salt to the ice water to lower the temperature even further.

I can get it down in the sink but in a motor home there isn’t a lot of room to work. I went that route already and the kettle just fits in the sink and is working through a bag of ice on the outside.

No holes in the bag and they are double bagged by 5 then put in the ice machine. Everyone uses them in their umbrella drinks with no problems I know of. Guess I chickened out just dumping some in too.

So far I scorched the bottom and boiled it over on the picnic table. What could go wrong?

Get a big tub of ice water and recirculate it outside on the picnic table. And oh don’t forget your sunscreen

Hope the scorch and mess isn’t too bad. I just re-learned not to use the computer for just a quick message. Missed a hop addition by 20 minutes.

I forgot you were in a motor home.

Would a tub to set along side the sink work better for cooling the wort in? Siphon the warmed water out instead of removing the kettle and dumping.

Ironically, in the cold cold north, I’m going to have to cool like an Australian. I can’t run water through my chiller, so kettle on the cold concrete, or in a snow bank for a few hours will have to do. My big kettle won’t even fit in my sink at this point… I’d use the bathtub, but the wife already looks at me funny.

On the topic of chilling. The Caribou Slobber is in the fermentor and once again wort is way to cool. Pitched the yeast at 57°. One of these days I’ll get it right.

Wife came into the house after the boil was started. Commented, “You make the house smell so good”.

Lucky dog. I’m thinking of buying another house just for brewing as SWMBO is always complaining about me turning mine into a brewery.

Alot of those bags have rips and holes in them…never know what gets in.

Do like me. Clear out the spare guest room and claim it as brewing room. On the kveik yeast just see if you get it down to 80 pitch the yeast. No issue about to warm if you use kveik. It takes of like crazy. And does its thing.

I got it down plenty low enough for the Kveik yeast in the sink ice bath then topped up with the warm tap water. It’s fermenting away very nicely right now.

Last year when I did a kit down here we went to one of those giant coin op ice machines and filled a big marine ice chest for about $4 then put the kettle right in. I also sanitized some 2 liter water bottles and put them in to have cooled top up water. Next batch I will go back to that.

Thursday the first homebrew in paradise should be carbonated.

I wonder about getting a garbage can yer fermenter will fit in, then pour the ice on top, have some small holes drilled in the bottom to allow the water to leak out slowly? Sneezles61

Not a bad Idea sneeze. Would have to throw it out before we left 'cause when you are in an RV for 6 months, you pack as much as possible.

Right now my wife is nice enough to allow the bucket to be inside the RV, a/c on. I did put the whole thing in a trash bag just in case of an explosion. Second day fermenting so that’s past.

Ice machines can be absolutely filthy. I wouldn’t trust the ice. Could you freeze some sanitized jugs of water and use those? You could use the store ice for an ice water bath, then toss in a chunk of sanitary ice you make to finish it up. 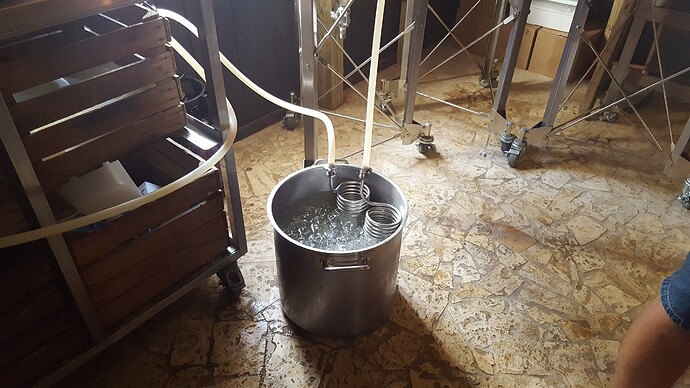 I thought you were only doing 3 gallon batches? Should be a piece of cake in an ice bath. If it were me I’d stick it in an ice bath and head to the beach then pitch the yeast tonight. No worries

I agree. We have a portable ice maker that makes 27lbs a day (if you are there 24 hours a day to empty and fill with water) that needs to be cleaned often. If not it really starts looking grungy. We only use it for cooler ice though. Supposedly bagged ice from the store or in this the RV park machine, should be safe if not punctured. I guess the convenience isn’t worth the risk of the ingredients and my time.

At the real house the cold ground water and CF chiller do the trick for 20 gallons. For mobile brewing 5 gallons and the old fashion ice bath will have to do. Oh and it’s 81 today