About to Give Up on Brewing - Carbonation

I have been extract brewing for about two years now but I have gotten very discouraged with overly carbonated bottles and I am about to give up on brewing and move on to another hobby.

The problem I am having is overly carbonated bottles. I don’t men a little. It is really bad. Imagine pouring a bottle and it immediately fills to the top with bubbles. This happens at least 80% of the time.

I have done at least 15 to 20 extract kits from Northern Brewer. It happens with every kit. I have a Cream Ale and an American Wheat left to do by the end of the year. If I can’t get them to work out I will quite.

I called Northern Brewer twice about this. I follow the instructions exactly. I was told both times I called to not follow the instructions. The instruction for the kits are wrong. I tried using calculators but they seem to want me to input “vols” of CO2 but since I don’t know what a vol is, I don’t know. I have decreased the amount of sugar I put in the bottling bucket, sometimes by as much as 25% and they still come out overly carbed.

None the kits are complicated. I have never used an adjunct. I have tried leaving them in the primary for a month. Primary fermentation should be complete after a month. Sometimes two weeks in the secondary.

I understand proper sanitation. I don’t get off flavors. Just a lot of carbonation.

It’s embarrassing. I don’t drink many beers per week. Most I just give away to friends but then they report gushers of bubbles 80 % of the time.

How much priming sugar are you using? Most kits come with 5 oz bags by weight.

Gushers, or just a lot of foam? I have had some exuberant bottles, but rarely big gushers. I stick to around 1/8 cup per gallon of priming sugar.

Hopefully the veterans will correct me if I throw out anything wrong, but volume of CO2 is based on the style of beer. There are several calculators that will automatically add this info based on what style you tell it. In my limited experience I tend to undershoot just a little and find that NB calculator is lower on numbers than bewersunited’s. I got really frustrated with a couple over carbonated beers early on, but hope you don’t give up. What was your most recent? Numbers for FG, temp,volume, type/quantity priming sugar and style of beer?

Somethings that you may be missing are, how much priming sugar you are using and how much beer you are priming. You need to use a calculator and know how much beer you have and the highest temp the beer has reached during fermentation. You need to pick a carb level that you want to achieve, since your having problems over carbing try shooting low on your next batch. Aim for 2.0-2…2. Check the markings on your bottling bucket they can be off, also if your doing kits your probably only ending up with 4 1/2 gallons in the bottling bucket.

We can definitely help. We can look at one brew that went bad in detail. I wouldn’t discount sanitation as a possible problem area. All infections do not produce off flavors but often produce gushers.

Here is a link to a calculator it also has some good info below.

Calculate precisely how much priming sugar to add at bottling time (bottle priming) for your home brewed beer. Works with a variety of priming sugars.

Here is a link for a good free online book. It’s a little out of date, if you stay with the hobby I would buy the updated version .

Dont give up. It fun brewing. Just take a other beer kit recipy. Do some calculations. First on paper. Than check your self with a brewing. Software. Should work out. If you have a hard time figuring it out. On the carbonation part. Why not try. These carbonation. Tablets. One per bottle. It is. Me just keg. The beer. But why dont you try. Kegging beer. And if you want to fill some bottles. Just take it out of the keg. Its all ready carbonated. Could be as well. A sanatizing issue.

Ive used both the calculators from NB and Brewers friend. Have not had any problems other than maybe wanted a little more carbonation. Its important to know as precisely as possible the volume of the beer you are bottling, and temp to get the right amount of priming sugar weight. I measure priming sugar by weight. I did also find the gallon markings on my bottling bucket were not correct. I now have it marked in half gallon increments that I measured out myself. I wouldn’t give up after coming this far. This is only one problem, taste was good, etc. I would start with the most logical solution and then go from there and re-evaluate your sanitation procedures.

Bingo…definitely helps finding the correct volumes on the bottling bucket!

I use domino sugar dots 1 dot per bottle. Thanks to @flars. The question I have are you sure fermentation is complete.
Sounds like your getting too much yeast in your bottling bucket.

This was my solution to making sure I knew how much beer was in my bottling bucket. I actually weighed 2 quarts of water at a specific temp to make sure my 2 quart container was correct. You can see this NB bucket was off. 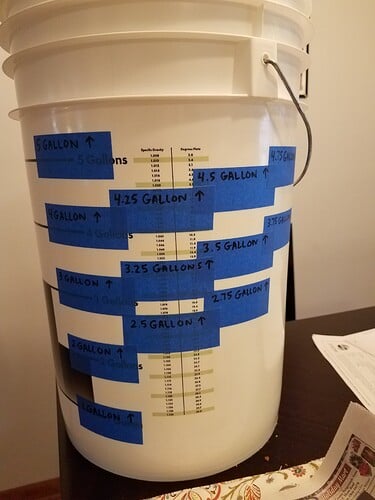 Maybe I missed some thing, but, what size kit are you doing? Lets start there. We’ll help guide you along… Sneezles61

We can definitely help. We can look at one brew that went bad in detail. I wouldn’t discount sanitation as a possible problem area. All infections do not produce off flavors but often produce gushers.

Maybe I missed some thing, but, what size kit are you doing? Lets start there. We’ll help guide you along… Sneezles61

is a good next step.

Another approach would be to offer to bottle for members of your local home brew club. I’ve learned a lot by helping experienced home brewers.

I have never carb in a bottle I find it very east to keg it and then use a bottle filler after it is carb in the keg. Not your question I know but other options out there.

This is exactly what I do as well. I just dont see a reason to bottle once I built a kegerator. It simplifies everything soooo much. I highly recommend going that route…

Don’t you ever go anywhere or need to empty a keg? I bottle off the keg when I need an empty keg I bring those bottles to parties or camp or just save some to age. I have two keggerators and ten kegs and still bottle some

Yep definitely. When I need to bottle I just fill from the keg. Either to a bottle, growler, etc etc. I have numerous kegs so I never find myself in a situation where I need to hurry and finish beer to use the keg for a new batch.

When I said “I just dont see a reason to bottle once I built a kegerator.”… What I meant was that I dont go straight to a bottle and carbonate from there. I carbonate in my kegs and then bottle from the kegs if/when needed.

I hear you. I have 11 kegs but I brew 10 gallon batches so if I have a little left I’m a keg I’ll bottle so I can fill the keg. This way I always have an assortment on the shelf either for grab and go or in the case of porters revisit down the road. It’s all good. I’ll bottle condition a cider or saison and definitely a Weis