Hello Everyone. I hope I explain this correctly…

I recently brewed the Tombstone Pale Ale extract kit. It came out great but I noticed a new flavor today when I brought a growler in to share with a couple buddies at work. There was a somewhat ‘hot’ or ‘alcohol’ type of flavor. I wasnt fond of it and wasnt proud that it was there. I am about half way through this five gallon batch and did not notice this flavor before. Its like it just recently started or something.

One of my buddies who is a long time brewer thinks this could just be a flavor typical with extract kits. Has anyone heard of that before? Also, does anyone else know this flavor I am talking about and how to avoid it in the future?

I just took a sample from my keg now that I am back home and while I ‘think’ I am tasting the same thing it is nowhere near as apparent and I could be just imagining it. I will grab another sample and let it warm up a bit and check again. Could there be something up with the growler? I bought the growler new and clean. I just rinsed it with water before filling it up.

I also want to add that I kept the beer at about 64-66 degrees during fermentation and cold crashed it at about 50 degrees after a month. I did not put in to secondary. There was about an 1-1.5 inches of trub in the bottom but I did my best to avoid siphoning that in to the keg.

It is possible there was manufacturing oils left in the growler that didn’t rinse out that you are tasting.

How long has the beer in the keg? It is also possible that the hop aromas are fading and the alcohol flavor is becoming more noticeable.

Taste it again from the keg without looking for something wrong.

It is possible there was manufacturing oils left in the growler that didn’t rinse out that you are tasting.

How long has the beer in the keg? It is also possible that the hop aromas are fading and the alcohol flavor is becoming more noticeable.

Taste it again from the keg without looking for something wrong.

I agree with the oils. I also agree that maybe some of the hops contribution could be fading and it’s becoming apparent. BUT, have someone test it without telling them and see if they can spot it. No matter what you try, no matter how hard you try, you’ll always think it’s there. A unknowing subject is your best bet.

Is it a high abv beer? You could add more dry hops

Thanks for the replies. The growler came from another company. I liked their beer so I bought a growler of it. After drinking it I rinsed it and then ket it air dry upside down. Same steps for the cap.

The beer is between 5-6%. It tastes really good and Im not noticing the flavor when poured straight from the keg any longer. I think I was playing mind tricks on myself. Its been in the keg for about 2.5-3 weeks.

I guess its the growler but that just seems odd. There is a definitive hop like bitter ending when drinking it so I dont feel like the hops are fading. Maybe Ill let it sit for a couple more days and test it again?

I doubt the hop bitterness will ever change…just become more noticeable as the aroma fades.

The heat could be from fusel alcohols. They typically condition out.

Iv been thinking about this and have noticed sometimes my beers taste different out of a bottle or growler. Iv always chaulked it up to different serving temp or carbonation level

It seems that way to me as well. I noticed a similar taste in a previous batch when I filled a growler. That one was a Bavarian Hefe. Im in the middle of brewing the Dundalk now. Im going to wait to pitch the yeast until the fermometer reads 64 then put it straight in the swamp cooler. Maybe that will offset the chance of fusels? 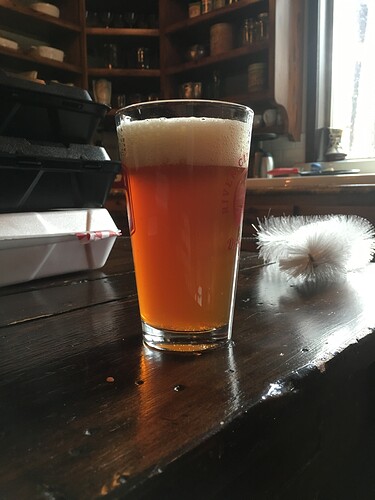 All in all its a tasty beer and I will def brew it again.

Nothing better than a tasty beer during an early brew day