OK I like northern brewers squished kit. I am using it as a sorta base for trying to clone cinderlands squished beer. They say “Our house pale ale brewed with Citra, Simcoe, Amarillo and Crystal 5.5% ABV”. So I will ratio down the NB recipe to give 5.5% alcohol. The northern brewer kit gives a calculated 62 IBU. I plan to use simcoe as the bittering hop at 60 min, amarillo at 30 and add the others at 5 min left to boil. This will give me a 62 IBU. I will measure the pH of the flat beer and target that pH level. I am brewing 1 gallon batches to perfect the clone. Comments on what you key in on first when trying to clone would be appreciated. I wish the beer makers would publish IBU to make it simpler!

To many variables besides IBU to actually “clone” a beer. Its kinda silly that breweries don’t give out the recipe as many do. I think it is the utmost flattery to try to replicate a beer

yeah agree I wish they gave out more info. Like IBU, hops and grain bill. But some of the fun is in the challenge! I purchased some 1.5 gallon big mouth to practice with. May have to do a design of experiments…groan. I did come up with a delirium tremons clone that was pretty close. I found a chimay blue and red clone as well. Both chimays have to age a bit to taste similar for some reason. Close but no cigar.

The tremons I only brewed once as we drank it while boating with the captains wife taking the wheel. She drove the boat to a restaurant on the water and the only thing I remember drinking was eating a salad then when we were about 5 miles from home. My drinking buddy woke up at 3 AM looking for where the boat was parked. My drinking buddy was not used to Belgium’s and we were splitting 24 ounce bottles I had made. He was drinking it like it was coors light and I had to keep up with him. Thank God for designated drivers!

Still have not found a delirium nocturnum clone recipe:(

Followup-The brewer had a conference on their squished beer and I got the complete recipe. I was targeting ibu of 20-30. They are at 28. I was using oats in mash as are they. I was using 2row rather than vienna as base malt so I struck out there. I focused on hop additions post boil as do they. I wanted to bump up crystal above other hops and that’s what they do. Not bad but I would never have gotten where they are without the recipe. They cold crash after full fermentation as I do which some may say is nuts for a hazy IPA. I also had the wrong yeast

I will not post the recipe as this is a big seller of theirs and I do not have their permission.

Learned a lot and am humbled now by what I do not know. Never realized that yeast converts 90% of the hop flavors for some hops not as much for other hops. Some hops best added before fermentation some after fermentation. Now that hop makers have started drying hops at lower temperature, there are actually fermentable compounds now in hops which now, when they dry hop after fermentation, they need to let it ferment again so they do not get bottle bombs on packaging.

Ok trial 4 of cloning cinderlands squish hazy ipa seems to be a success in terms of taste but the color is not a complete match. I struggled to taste a difference. As you can see from the attached photo, my beer on left is somewhat darker color. I brewed it from the brewer’s recipe including water chemistry and this time followed the instructions exactly as best I could decipher them. I took a sample, force carbonated it in a soda bottle at pressure and slightly went above 2.6 vol/vol. What would you do to match the color? I think mine is darker because it has more suspended solids. I was thinking of kegging it without carbonation and letting it settle at 34 F for 3 weeks. If that does not work, add gelatin and let it sit a week more. Its already sat at 34F in primary for 6 days, which is what brewery does. Also thinking of saying forget it and just accept it as is LOL Thoughts and suggestions appreciated.

As I side note, I detected very slight amount of diacetyl when I heated sample to left to 150F for 30 min. Very slight amount. This was due to heavy dry hopping at 60F for one day and getting slight amount of additional fermentation before I crashed to 34F. I do not taste diacetyl in the finished beer. After that find, I added an ALDC catalyst to convert the diacetyl precursors to another chemical and thus avoid diacetyl formation. I will test tomorrow to see if it worked. pH my finished beer 4.5 same as cinderlands squish. Both finished beer gravity 1.012. 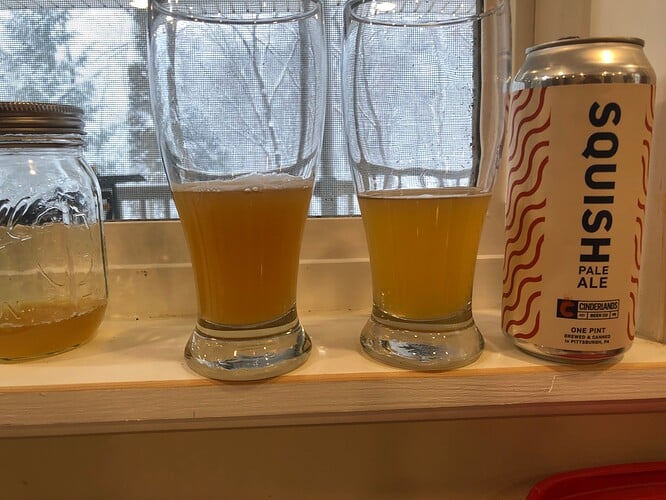